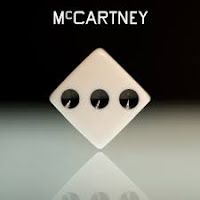 When did Paul McCartney enter my life? I have no way of knowing, but it will have been when someone in the family played a single by The Beatles and here I have to include the family that I stayed with regularly being a merchant mariner's son. The two girls both had The Beatles singles and albums as well. So, if one can be a fan of a band before being conscious of what a band is, I certainly was. Soon after, I became aware that was a thing called a "new single" and a little later again "a hit single". In the fall of 1968 I bought my first and last The Beatles single, while it was in the charts, 'Hey Jude'. Of course, it's still my favourite The Beatles song. As a young teen I really was introduced to The Beatles through the two giants under the compilation albums, '1962-1966' and '1967-1970'. In the winter of 1978 the album trip started with buying the big albums and older ones second hand and the solo albums.

Somewhere late in the 80s The Beatles slowly left my life. Solo albums became less and less interesting on average. I always loved hearing one of the hits, but never put it on at home any more. I loved playing and singing The Beatles songs with the bands I was in through the years, right up to this day. The playing at home only changed because of The Analogues. That cover band among cover bands had the same influence on me as the family members I started this post with.

And Paul McCartney you may ask? After 'Venus And Mars' his albums became less interesting to me. 'Flaming Pie' and to a lesser extend 'Figure Of Eight' were the exception. Even the lauded last album did not do much for me. So to put it mildly McCartney III was not a highly anticipated album. Of course I took a listen and was slowly but surely in a mild way swept of my feet. At 78 Sir Paul cannot surprise me any more after a trip now lasting well over 50 years? And yet he did.

To think that McCartney III in all likelihood would never have been here had 2020 been the year that was plan. Paul McCartney was about to go on another world tour and then the world closed in on itself and Sir Paul found himself in isolation, with lots of instruments and recording equipment. And what does an artist with a drive like McCartney do but write songs and records them. Like the first two albums with only his family name as title, he made the album all by himself. Everything you hear is Paul McCartney.

The result is an elementary album that is as raw as it is pure. This is Paul McCartney at 78 and it shows where his voice in concerned. I had to get over the sound of his voice to be honest. What it results in, is a deep respect. There's no concealing on the one hand. On the other there's no hiding, simply because McCartney has no intention to do so. He let's his voice be heard in all sorts of shades. What suits the song best is what we get.

Musically the album is all over the place. From small acoustic songs to stark rockers and a long outing in the centre position on the album. 'Deep Deep Feeling' has several sides to it, including some beautiful guitar work. The song shows that also at 78 McCartney is still exploring what he can do with a song and what a song can do with him. This is a characteristic that is not given to many at that age. Whatever he may listen to privately when alone in his room, when he's in the studio something wild like 'Slidin'' still can come out. "I know I can die trying", he sings. That does not hinder him nor holds him back to come up with a deep, dark riff and singing with a lot of tension on his throat and head.

Perhaps it is the diversity that surprises me most on McCartney III. That and the relative rawness of the album. Even the acoustic outings have a little edge to them. Simply because nothing's been cleaned up in the process. The result is a collection of songs that are very pleasant to listen to. Is III equal to McCartney's best work? My favourite will remain 'Band On The Run', but after that? At this point in time, three days after the release, III is certainly contending. And it has, let's face it, an incredibly cool cover.

When all is said and done, there are two comments left. The first is, this will be the first McCartney album I'm buying since 'Flaming Pie', but that comes up to the second comment. What to buy? What is the logic about all the different version and bonus tracks in Japan only? Except to be clobbering some extra cash out of the pockets of the most loyal fans. Sir Paul, it doesn't befit you. Your loyal fans deserve a better treatment than that.