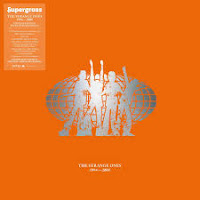 This set of music comes as luxurious as you would like it to be it seems. I haven't gone to all that lengths to have posters, coasters, and what. In fact I haven't even bought anything. I have all the regular albums and a fair share of cd singles with extra's, so for me that it enough.

The Strange Ones covers the 14 years Supergrass released records. We're almost as far down the line without a new record! The compilation is a ton of fun of course.

Supergrass surfed to the top right behind the huge wave Oasis and Blur created. As such Supergrass is The Small Faces or The Spencer Davies Group of Britpop. One of the bands basking in the light of the biggest bands. Straight from the beginning I was on board. 'I Should Coco' was bought, but my true relationship with the band started with the single 'Pumping On Your Stereo' and the 'Supergrass' album, followed by my favourite 'Life On Other Planets'. After that things never were the same again, although I thought 'Diamond Ho Ha' was quite alright. I even got to see them live in the summer of 2008, finally and just in time it turned out.

If I'm honest, all the Supergrass albums have not come out of my wall of music for years. I enjoy the odd single coming by, usually 'Alright'. So how does Supergrass fare with Strange Ones?

Quite alright actually. Listening to the compilation put on Spotify the energy coming from the band and its music is totally evident. As such Supergrass was always a positive band. They celebrated life and the opportunity it offered to play this music that aims to please. Just listen to a song like 'Rebel In You'. The melody bursts at the seams, is full of joy. There simply aren't that many bands that achieve this joy. Kaiser Chiefs were great at it, as was Kaizers Orchestra and that great song about the monster coming over the hill by whatever they were called.

Supergrass is more Beatles than Stones in feeling. Its music is instantly danceable, invites singing along to whether sober or inebriated and puts all listeners in a great mood. Come to think of it I wonder why I do not play the music more often? The answer is most likely that I love to wallow in another man's misery. Sadness gets to me far more deeply. Something I realise just now as it is a question I've never asked myself before. 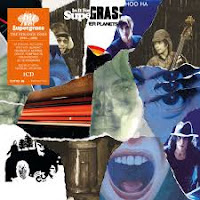 Still, listening The Strange Ones, it is clear Supergrass has made a unique collection of songs and cut its own niche out in the pop pantheon. I notice that the album on Spotify counts down the time. The first songs, so the youngest ones, all sound excellent and are great songs. Gaz Coombes and his gang were great songwriters and arrangers. Good to notice as I should pull out one of the two last albums first and see how I like them in 2020. They were reviewed in the magazine version of this blog at the time. I'm sure even the greatest hits one was. In the eight years the blog is here, no Supergrass however. Something I can make up for today.

Supergrass was enormously popular in the U.K. but with each album had to take another little step back. Here in NL they never made the big time. Hardly any U.K. bands did at the time. Not even Oasis or Blur scored huge hits in the 90s over here. For me it was always the number 2 Britpop band, not being a fan of Blur. It seems like it still is. I saw the singer of the #1 band live just last month. Those days when the Corona virus was something happening to China, not us. All shows are cancelled at the day of writing and I'm afraid will be for months to come and not weeks.

For all for now I wish you good health, stay safe and assist others where possible.

You can buy the super duper box set here: