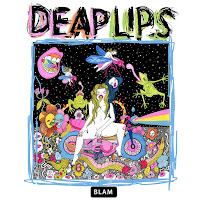 Well, the cover does not leave any doubts about which deep lips I'm writing here, but also I had expected to hear a youthful punk band or one of which the male members are rather stalled in their mental development.

The entrée, a speeding car and the loud guitar chords keep this idea alive, but when either Lindsey Troy or Julie Edwards starts singing to a bass drum and an acoustic guitar (and some weird noises) all my preconceptions go puff. It's not folk music but certainly an alternative pretty girl sort of song, including a rapper trying to sing thanks to an autotune.

Now you may think, that I was totally turned off of Deap Lips. Far from. This is a fun and very diverse album. Opener 'Home Thru Hell' followed by the electronic 'One Thousand Sisters With Aluminium Foil Calculators' set an atmosphere that comes totally unexpected and appeals more to the hippie, psychedelic part of the cover of Deap Lips. When that instrumental morphs into 'Shit Talking', just a voice and an electronic piano (and weird noises), the idea of a integral piece of work starts to form.

This thought is broken by the abrupt change into the folky, poppy 'Hope Hell High'. Again a serious song by Deap Lips. For the first time the concept of beauty comes by, until the band starts to deconstruct its song by something sounding like a cut up technique before a piano joins in stretching the song out as it were, together with the synths. After which the song gets a punky, disruptive element injection as well. Hearing is believing. Especially when the disruption turns into the punky 'Motherfucker's Got To Go'.

So who is Deap Lips? It turns out to be two bands deciding to cooperate and join names. Deap Vally and The Flaming Lips become Deap Lips. From there it is not that difficult to understand the music better. Here literally the two band morph, kicking the one out of the mix and then the other before it blends once again.

It all started with a meeting at a Deep Vally show and led to creating a full record made in bits and pieces after a successful joined session in Oklahoma City. Something that was never intended, turns out to have become an intriguing album that is more than the sum of its parts. Both bands shine without having to compromise it seems.

Just listen to the spooky 'Wandering Witches'. A combination of a looped soundscape, repeated riff and great pop song. Nothing sounds easy in the song but still as a whole it is (near) pure pop. A little weirder is 'The Pusher', the second best known Steppenwolf song. Here the band decides to go fully electric in sound and vocal. "The pusher don't care if you live or die". Rather bad for business, isn't it?

Alright, some songs are not completely my cup of tea, just like e.g. with Warpaint's songs, as a whole Deap Lips convinces. There is more than enough to enjoy and discover. It's your turn to do so.

You can listen to or buy Deap Lips here: