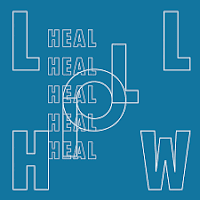 With its new release Low Hill finds its way to these pages again. Almost three years ago, the single 'Don't' was presented and two years ago a mini album called 'Hurt'. All electronic popsongs with a dark edge. Low Hill doesn't make it necessarily easy for its listeners. The music aims to take an effort before I can start to really appreciate it. So far, the effort always pays off.

The good news is that the sun may be starting to shine through in Low Hill's musical universe sometime soon. Consider the following. 'Don't', a title containing a warning, resulted in 'Hurt'. Perhaps from not heading the warning. After smarting for a long time, it has become time to 'Heal'. So the next song could be called sunshine or joy.

Heal, again, is a darkish kind of song. The prominent feature at the start of the song is the electronic rhythm that is, despite the mid tempo of Heal, erratic. Over the rhythm lies a layer of electronic sounds that add to the melody and mix a melody with rhythmic, pulsing notes. To catch the vocals at times it is necessary to almost set the rest aside. It is Laurens Vanhulle's voice that wins out though. The dark undertones in his voice mixes beautifully with the full sound, while his high background vocals provide the electronic song a robotic human touch.

When the song started, I was reminded of Duncan Lawrence's winning Eurovision Songcontest hit 'Arcade', as both songs have a desolate kind of emptiness in them. Low Hill chucks that emptiness away. "You've got to give up on something" is the key message of Heal and that something is emptiness. The song slowly but surely fills up and swells, and then some more. From a modest song Heal traversed to a pumped up gym version of itself. From the very beginning the song contains some nice details that are there for just a short while. Little surprises that make Heal glow.

Although the song as whole may on the one hand sound slightly familiar as having been done before and on the other have clinical coldness surrounding the whole, it is winning. That has to do with all the fine rhythmic and melodic twists, but also with all that layers in Laurens Vanhulle's voice. He has all these different textures and range in his voice that make Heal as nice as it is interesting.

Low Hill's songs may come slow, they are certainly convincing and showing growth. So I am certainly curious about what is to follow.