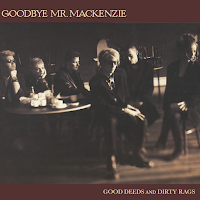 What is Goodbye Mr. MacKenzie? Listening to the album by the band I have the idea to be listening to a mix of 80 acts ranging as far and wide as INXS, New Order, Deacon Blue, Mark Almond, Simple Minds, Spandau Ballet, Roxy Music, Bryan Ferry and who knows what more and sometimes even within one song. As if all these artist have been put into a studio together and were told not to leave before they had written, played, arranged and recorded songs together. And late in 2019 the result has finally been released.

And then I read up on the band. It doesn't just sound like the 80s, this album is the 30th anniversary edition. This is the 80s. This band seems to have soaked up all the influences of the decade and emulated its synthesis in the final year of the decade. The pure essence of 80s pop and rock come by surfing the waves of those turbulent years that ended with the fall of The Wall 30 years ago last November.

Goodbye Mr. MacKenzie is a new name to me, so my bad in mistaking the album for a new one, is easy to understand. What keeps surprising me, even after several spins, is how much I like the record. It easily surges to the top of my 80s favourites. The charm starts with the singing between Martin Metcalfe and Shirley Manson and Rona Scobie. And with Shirley Manson finally a bell goes off. Not long after this record she would become a member of Garbage of course as lead singer. The singing creates the vibes Deacon Blue's Ricky Ross and Lorraine McIntosh once did. I am back in The Hague's Zuiderpark and Parkpop 1987 immediately. 'Raintown', I fell in love with Lorraine just by her singing without knowing what she really looked like. This could have happened with Goodbye Mr. MacKenzie as well.

Goodbye Mr. MacKenzie is a melodically extremely strong band. It obviously refused to hide the song behind the often rather stiff and alternative arrangements as most bands seemed to do at the time. The song comes first leading to songs begging to be sang along to. I'm not surprised the band gathered a following at the time and was welcomed back in 2019 as a long lost friend.

Next to that Good Deeds And Dirty Rags is a varied album. In sound, approach of the songs and styles. The gloom of the decade has been laid off, the sun and the fun allowed to break through. 10 Songs and it's all over, but in between there's a lot of joy to be found. The reissue come with three demos from 1987.

If you haven't heard from Goodbye Mr. MacKenzie before, like I hadn't, it's time you do. All others, enjoy it once again.