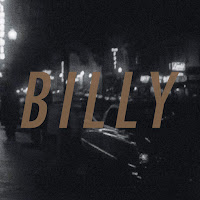 Donna Blue is inspired by a kind of music that was popular for only a very short period of time. A time where innocence and teen hurt met in a orgy of reverb and echoes. Nancy Sinatra before she met Lee Hazlewood and released singles like 'Like I Do' backed with 'To Know Him Is To Love Him'. The Shangri-Lahs' most famous single 'Leader Of The Pack' is another one. Let's say roughly before the loud side of the British invasion stormed America and with 'The Last Time', 'House Of The Rising Sun' and 'You Really Got Me' wiped out a whole generation of American artists that either reinvented themselves successfully, e.g. Bob Dylan, The Beach Boys, Nancy Sinatra (with Lee) or were never heard from again.

It is that kind of song, the kind The Stones et al wiped away, Donna Blue resurrects once again on its new single, 'Billy'. It even sounds at the start as if a 56 year old single is fired up on an old record player. Little scratches before the song takes over in its digital form. 'Billy' is a soft toned song, with a darker, though extremely longing, voice. The telephone conversation is styled on the U.S.' best efforts from long ago. The song is about a break up in denial. 'Billy' is no longer answering the phone, nor is at home any more for the singer.

But that soft and longing voice is not all. First, let me mention the little background vocals, the na-na-na's as well as the repeating aahh's. Second, in just 2.51 minutes the whole story plays out. From surprise, to denial, to  realisation that kicks in. It is this effect that makes Billy such a strong song. Third, the voice of Danique van Kesteren hardens by the 30 seconds, when she realises the break up message was not a weird kind of joke. Four, the little organ solo at the end tells it all. Five, there's no need for another lyric or the repeating of a chorus. Danique is mad at "Billy", hurt, sad and disoriented. Six, all the three members of Donna Blue have to do is follow the voice to bring the song to its crescendo.

I just gave you six reasons to listen to Billy in a song well under 3 minutes. Without even trying too hard. Donna Blue once again does everything right. In six weeks time the new EP is released. I can't wait.

You can buy Billy here: