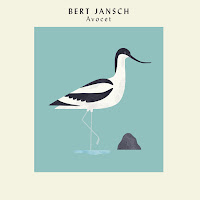 Bert Jansch to me was a name, from a past I was not a part of musically and associated with British folk music that when younger I had no place for in my pop - beat - (symphonic) rock discoveries in the 1970s. 'Liege & Lief', e.g., was not for me.

So when I was sent 'Avocet', the 40th year anniversary, I was not inclined to listen. Sometimes I do anyway and yes I was pleasantly surprised.

(Her)bert Jansch was born in Glasgow in 1943 and died in 2011. Avocet originally was an album recorded after a period of stepping away from music after Pentangle had folded, a folk band from the late 60s, Jansch being one of the founding members. Before Pentangle Jansch already was a recording artist in London, his songs successfully being covered by Donovan, 'Do You Hear Me Now' or stolen by Jimmy Page, 'Blackwaterside' that became 'Black Mountain Side'.

On 'Avocet' Bert Jansch blends traditional folk sounds with more modern influences. In that sense he emulates Led Zeppelin in a way, fully dropping the rock side that 70s dinosaur band always held within it. Yet many other bands from the 70s can be heard in some of the, strictly instrumental, songs. On the new version, three live recordings are added to the original.

The title song is the pièce de resistance of the album. Over 17 minutes, contrasted in time and instrument by the only one and a half minute 'Lapwing' lasts. 'Avocet' is an exploration, starting, just in the first two seconds, like Jansch is testing his guitar, after which he is off, slowly exploring a theme, to which a bass guitar and a violin are added. More guitars or overdubs join in. Major accents are played. Yes, the basis is folk, but more in a 'Tubular Bells' kind of way than traditional folk.

The music on Avocet keeps my mind at work and at bay. I notice I'm following the way the main theme is worked out but also notice that I am not drawn into the music. How I admire the quality of playing, the pure skill and sound, but it does not warm my heart. At the same time I cannot deny being attracted by the playing. As such I am remembered by music I heard on several Kairos shows on Concertzender. Jazz music from a trio with a Polish name, I can't remember. Musically totally intriguing me, with one difference: I can imagine returning to Avocet, easily. As the guitar based music by Bert Jansch is more familiar to me in sound. The bass by the way is played by Danny Thompson, ex-Pentangle as well, and Martin Jenkins playing all the other instruments that can be heard on the album.

Avocet was recorded and first released in Denmark in 1978. Only in 1979 the album was released by a U.K. label, so the 40th anniversary really is a 41st anniversary, but o.k. In my opinion, not knowing anything else by Bert Jansch as far as I'm aware, the re-release is a just one. Avocet is an album that does not sound dated for a second. In fact it could have been made today. The music is intriguing, intricate, of high quality and interesting the whole of the way. Who knows I may even warm to it over time.

You can listen to and buy Avocet, the 40 anniversary here: