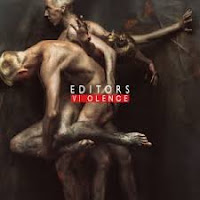 Having finished listening to Violence for the first time, it's like I've been slapped in the face. Hard. On its sixth album Editors goes all out. Nothing is held back. The start of the album, 'Cold', is totally deceptive. The album really starts at 1.41 minutes when the drums and guitars come in for real for the first time.

I have never been a fan of Editors. The band reminded me too much of that dark start of the 80s, those days when the heavens were about to fall on our heads. No hope in sight. That started to change because of a single of its fourth album, the exception, and truly changed with the fifth album, 'In Dream'. For some reason I always kept listening to a new album and was finally rewarded in 2015. I can't even truly provide you with a reason for this change in appreciation. It just happened.

So for the first time I looked out for a new a new Editors album and was rewarded instantly. I listened to the album on Spotify and listened again and again. It won't be very long before the vinyl version enters this home.

The darkness remains. It is all over Violence. There's so much of it. Of course this starts with the voice of Tom Smith. Its deep and full of emotion, if he wants to. It may be that we have found one reason for me liking the band better. I find that it seems like Smith has listened to Queens of the Stone Age and uses his voice slightly differently since. Whatever the reason I like his singing so much better than circa 10 years ago.

"The guitar is back", I read a lot on this album. That may be, yet disco pulsing rhythms and sounds are all over Violence, combined with a fine, dark rock sound. The drums and bass are mixed deep into the sound. The synths slither around over it like a snake in high grass. Adding a sense of danger to the music. As if the song can explode any moment. The title song is the best example of this. Giorgio Moroder in 2018, the only thing missing is a cameo by the late Donna Summer. "I Feel Love" can be mixed into the coda of the song without effort. This is what I call exiting music. The guitar is there at times, yet also often disguised through effects in such a way, the sound could have been produced by a synth also.

Having listened to Violence more, I can't help noticing how this album does everything to sound very modern while making use of a genre that is all but dead and buried: disco, with a 'Baba O'Riley' pulse here and there. This makes for a strange hybrid, but one that works extremely well. There is really nothing much at fault on Violence. Editors have caught a groove in London while recording this album. To find it the band worked with Blanck Mass, an electronic music producer. It's simple, this works.

Editors does not necessarily go full out on Violence. Getting to know the album better, the nuance is certainly there. E.g. in 'Nothingness' the pace slows down. A little U2 style ballad. At the same time even these slower, or less filled songs, are in your face. The approach to the song remains very direct. When the drums kick in, there is no holding back. The electronics at the end remind me of Madonna's 'Frozen', of all influences possible. It shows how versatile this album is. Dynamics are used to great effect on Violence as a whole. Making the album even more impressive now I know it so much better.

When all is said and done, one thing needs to be pointed out. No matter what great effects are used on Violence, Editors comes up with several great songs. The band knows the secrets of songwriting before production sets in. While producing the record it knows how to maximise the effect of a song as well. On Violence it does so to the max.

So far 2018 has delivered several albums that I'm sure will remain relevant for a long time. Violence is one of them. Editors has outdone itself as far as I'm concerned.