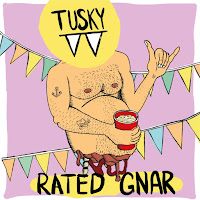 What to expect with a cover like this? Punkrock was my guess and I was proven right. But what to make of this?:

"To shred gnar, to bash the white wave, to thrash the snow, to rock out wicked hard, to ride copious amounts of white pow so hard, others are in awe of your steez. Can be used to describe any action in which you do something awesome to the extreme, however should not be used lightly."

This is the text the bio opens with and is for you to figure out the meaning of. I gave up. So let's go and face the music.

Out of my speakers rolls wave after wave of powerful punkrock. The kind that aims for writing the perfect popsong. The kind that makes you want to jump up and down to. The kind that invites shouting along to. And succeeds A whole album long. It sounds familiar as fuck, but who cares. The songs are so tight, so rocking hard and so good. Musically I've written enough right here and now. This is all you need to know.

But where does all this come from? To my total and utter surprise from that part of The Netherlands where the protestant menbrothers and aldermen still have a lot to say. Where the biggest political party until very, very recently did not allow women to be on its list of representatives. The town of Alblasserdam hosts the best punkrock band I have ever heard from this country.

The guitarists have a John Coffey background. Alfred van Luttikhuizen as guitarist, Sjors van Reeuwijk as guitar tech. Together with drummer Bas Allein Richier en bass player Justin Ghijsen they aim for a loud, perhaps the loudest sound but not without losing sight of the song behind that enormous force. And Tusky never does. The band competes with the best that has come out of California in the past decades. And it does play in that league. The Premier League of punk rock it catapults itself in to.

Van Luttikhuizen's voice is the kind that keeps the band human. No supernatural shouting, no wailing. It's only party time. Behind him Tusky lays down a solid sound where every once and again a lead guitar is allowed to escape from. Even if it is a single note in overdrive, it is enough as an accent.

I'd say you know enough. In it's sort this is a ***** star album. So if you like the genre go and check it out yourself.

You can listen to 'You Will Not Regret This (Please Hold Still)' here:

Listen to the WoNoBlog Playlist here: