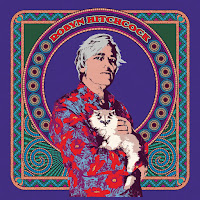 For some reason I expected to listen to a gravelly old country singer, something like Guy Clark in his later years. A man with his guitar and what is left of his voice. The cover could have warned me otherwise. The music surprised me totally. And only then I started to look up who Robyn Hitchcock is. Thus I found out what I somehow managed to miss. Not a little, all of it. Nearly two dozen solo albums, The Soft Boys. Nothing ever came by me of a recording career spanning more than 40 years, as far as I know. So it is time to make amends.

Robyn Hitchcock is an album filled to the brim with alternative pop songs of the most pleasant kind. Hitchcock is not afraid to take little by roads that colour in his songs just this little differently. A pedal steel will take you through the country & western path, a slightly darkly filled in music through new wave lane and a few extra effects into psychedelia alley. And all songs have this great pop feel. Something close to The Kinks in their finer days. Ron Sexsmith may be far more sweettoothed in his songs, the way they flow Hitchcock and Sexsmith could be brothers of different fathers. Three songsmiths what we're talking about here.

Underneath it all is a sense of Britishness. Of decency but also a certain aloofness. Like an observer who remains himself behind his 'Autumn Sunglasses'. A song like I've heard several times before through the years and still it touches me in the right places. The combination of a clear mix but filled mix leaves enough room for Hitchcock to deliver his observatory lyrics and detached singing, giving the song its unique sound.

If there's a comment I have to make, than it is that there's no joy on Robyn Hitchcock. Although nearly all songs with the slightest tweak could have been (more) joy filled. Whether that is a problem is another matter, but it would have provided the album with a little extra ingredient. Perhaps the difference between a critically acclaimed and a successful album. Hitchcock's voice has a quality for melancholy. This shows in almost all the songs and certainly is a strength, I think.

The album starts with a start, a bit dissonant before Hitchcock pulls in the reigns and moves into a punky chorus. In the songs everything I liked around 1979 comes together it seems, The Police, Fischer-Z, Joe Jackson, if we leave out the reggae bit that is. I even hear a little The Boomtown Rats in there. And then there's is this light voice that floats over the flotsam and jetsom of the song. It makes it all lighter, the voice and the Hammond organ filling up the background. The rest is solid without overdoing it.

'Virginia Woolf' and Sylvia Plath in one song. It's about final solutions in life allright, even if they were allright as Robyn Hitchcock sings. "Sometimes it hurts, where you don't want to hurt" and things come from that, he seems to say. Strangely enough this is the most upbeat song of the album. All is relative though.

Expect some country, some more new wave rock, some The New Pornographers' rock (and lyric theme) and The Beatles harmonies. Robyn Hitchcock is a varied enough album, that pleases the ear no little. Put in some female vocals to accompany him and things perk up even more. There are many things to discover and enjoy. Now I don't know what he sounded like 10 to 40 years ago, but there's hope for us all if I hear how he sings at 64.

Robyn Hitchcock is a fine album, that finally made me discover him with so much to discover. Where to start? Any suggestions, dear readers?

You can listen to 'I Want To Tell You About What I Want' here: