Feels Like Going Home. The Box Set. The Walkabouts 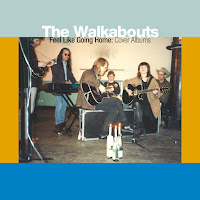 This year it will be six years since The Walkabouts released a new album and 12 for the one before that and I seriously doubt whether there is ever going to be something new by the Seattle based band. In the meantime Glitterhouse Records releases a modest box-set with the two cover albums by The Walkabouts adorned with a live album with songs from the two albums.

The Walkabouts and I go back for nearly a quarter of a century. My renewed interest in new released music started in the spring of 1993 when I returned to 'Oor' and as a result was exposed to and started listening to new music. One of the writers at the time was Oene Kummer. I could follow his advice in reviews almost blind. Whatever he wrote about, I would give a chance. Whether he wrote the review for 'New West Motel' I can't remember, but he might well have. This alternative rock album was followed by an album filled with covers in the country/folk idiom. Quite to my surprise, I can add, but it did a few things. One is that I truly liked the diversity the band showed and my then wife and a lot of friends and colleagues started to like the band because of this album. We saw many a show. I think that at one point in time we were with a group of twelve going to a show.

'Satisfied Mind' is the oldest album captured here. The album that gives the title to the box set, as 'Feels Like Going Home' is one of the titles. The Walkabouts go fully country here, capturing the best the U.S. had to offer, in its own unique voice and style. At the time the band still hoped to break in the U.S., while growing a fan base in Europe. That break never came. Soon after 'Satisfied Mind' there was only a record contract in Europe. I still wonder why, as this band was so unique and had so many good songs that a breakthrough should have been as simple as 1+1.

What makes 'Satisfied Mind' unique and still good 24 years later is the mix The Walkabouts made in the choice of covers. Johnny Rivers' 'River People' gets a beautiful laid back treatment through which Chris Eckman plays a sharp harmonica that adds an enormous interesting flavour to the song. Patti Smith's 'Free Money' is changed to something different. Just as urgent, yet resigned with a hint of danger: really different. On the other hand there is true country in Gene Clark's 'Polly'. Carla Torgerson sings very subdued, while a pedalsteel guitar wines away in the background.

The Walkabouts is a band that never was satisfied with just the band line up. Also on 'Satisfied Mind' there is a range of instruments that goes beyond the drums-bass-keyboards-guitars set up which is the basis of the band. Anything that is needed to make the band sound more authentic is there. A blistering violin solo? Check. Pedal steel? Check. Mandolines? Check. And more. On top of that all is the beauty and the beast vocals of Carla Torgerson and Chris Eckman, at the time still a couple. Voices made for each other, giving the band a fairly unique sound. Even when The Walkabouts play other people's music.

Remains to note that on this album the band touches on pure beauty and deep emotions. Just listen to 'Poor Side Of Town'. The music seems to drag behind the song, the piano, the guitar solo, the lingering organ and pedal steel. The spot on vocal delivery by Chris Eckman. And there are several more great songs like this to be found here.

'Satisfied Mind' was followed seven years later by a second cover album, 'Train Leaves At Eight'. This album was filled with European songs from over the whole continent. Songs the band had picked up through the years. By 2000 I was still a fan of the band. That simply never changed. At the time I was less happy with the new albums the band produced. Each album became more silent, less exuberant, from 1996 onwards. By the time it was 2003 I quipped that the only step left was to produce an album without music. And that is what sort of happened. The production, which had been prolific, halted. Chris Eckman moved to Slovenia, went solo, leaving the band members behind for most of the 15 years since.

Back to 'Train Leaves At Eight'. The album does two things. The Walkabouts manage to capture the music without losing the European flavour of the songs nor losing its own signature sound. Listening to the album for the first time in over a decade, I notice that my ears are screwed on differently. The music is so subtle, so well placed and arranged. The Walkabouts have grown better and more sophisticated in the seven years between the two albums. Song after song I'm touched by the singing and playing. The less is more principle in 'Silenci' e.g. works 100%. An acoustic guitar, a few piano notes and atmospherics is all it takes to make Chris and Carla shine. This well-balanced mood is continued for most of the album.

Having played the album several times due to this re-release I notice each time how much more I appreciate 'Train Leaves At Eight' than I did in 2000. There are so many subtle details in the songs, that are multi-layered and refined. The Walkabouts are in great form.

There's and extra to this boxset. A live compilation album called 'Go To Hell, Back At Eight'. The Walkabouts released many live albums that allowed fans to have more than just the studio albums, often sold at shows. A live show from The Walkabouts always was a great experience. I can't recall how many shows I've seen, but it may be as high as 10. Including the last one early 2012 in Paradiso. The compilation registration added to this box set, is no exception to this rule.

There's only one complaint. Where are the few odds and ends covers the band played through the years, some of which were released on the rarities cd 'Death Valley Days - Lost Songs And Rarities'. That would have made Feels Like Going Home complete. For the rest there's nothing to complain about. This is a great box-set by one of the most important bands of the past 25 years. Nothing more, nothing less.

In 2015, I just found out, The Walkabouts disbanded. My favourite band of the 90s, there is no denying there, is no more. What is left is a legacy worth remembering and a treasure trove for many people to discover. Listening to this box set, I am reminded how good this band was and its music still is. For those who haven't before, it is time to find out for yourself.

You can listen to 'Satisfied Mind' here:

or order the album at the label: