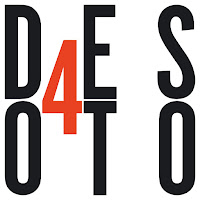 The Desoto Caucus? Really never heard of. That's no reason to stop me from checking an album out. I was pleasantly surprised by the music of a band that reminded me instantly of the work of Chuck Prophet. There are notable differences, but they could be brothers of different fathers.

It is not hard to predict that 4 will be the band's fourth effort. Next to releasing its own records The Desoto Caucus also toured with Howie Gelb under his band name Giant Sand. I'm not a fan of the latter, so there's no need for comparisons.

4 Opens with a drum rhythm, followed by a chugging, muted guitar. The pleasant vocal melody that follows suggests that there was an acoustic guitar involved in the composing phase after which the band started working on the song. 'Let It Glow' has a bit of mystery within it. That is added to by way of a high mixed lead guitar that seems to fade in the wind that blows over a vast, endless desert. The change to the more solid 'Powerlines' is so pleasant. The chorus is one that is quite easy to memorise. The mystique remains though. It is captured in the light, slow singing of Anders Pedersen and Nicolaj Heyman. One some what deeper, the other a higher voice. Their voices can be heard all over the album. The one following the other like a memory or ghost of things past if you like.

4 Is an album full of atmosphere. It has a subdued overtone. Like it is late at night. No one wants to go to bed yet, but the real party is over. A last drink for the road and The DeSoto Caucus is on the stereo. The first people drop off to sleep on the soothing sounds, the rest starts listening and become instant fans. 'Long Gone' makes me want to close my eyes and just listen. Take it all in and wait for that slow electric guitar eruption that comes by every once and again. The sort of music to be mesmerised by.

The DeSoto Caucus is from Aarhus, Denmark. Having visited the town once, too long ago, there wasn't one moment that I associated it with the Arizona desert sort of music that can be heard on 4. That may well be the Giant Sand influence. No doubt the foursome will have met Joey Burns and John Convertino as well in Tucson. They steer well clear from the Mexican influences that they mix into their music.

Anyone who expects a lot of excitement in their musical diet knows by now that 4 is not for them. If on the other hand you like to explore an album song by song and note by note there is a lot to like on 4. The music is allowed to breath, highlighting that what does happen extra, as it stands out immediately. That guitar note, piano note, it is made special by the way the band presents its little extras. In other words, 4 is a modest album, presented with pride and confidence.

You can listen to 'Let It Glow' here: