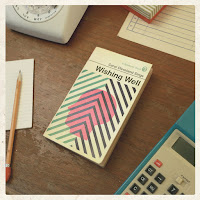 Following Gretchen Lohse since I was introduced to her fine album 'Primal Rumble', I became aware of Tweets alluring to a collaboration called Carol Cleveland Sings. A while back a link to an EP was offered, so I started listening.

Carol Cleveland? Wasn't that the lady who played many roles in the Monty Python's Flying Circus sketches when they needed a real woman and not cross-dress? The answer is yes. Thank you Wikipedia.

This Carol Cleveland is a duo. Next to Gretchen Lohse Thomas Hughes is a member. He also plays in The Spinto Band, who's members helped Gretchen make her debut album. This EP holds two songs by Thomas Hughes and three covers. The sound holds a straight reference to music coming out of the 60s. Despite some light psychedelia, the girl pop, the more serious side of The Beach Boys and the French female singers, so called "zuchtmeisjes", of the era hold dominance.

Now that is all fine and well, but the first song of the album simply could not have been made at the time. The title song holds so much electronics that a producer recording in 1965 could only dream of this sound in his wildest ones and even then run short. However, if you look at the free flowing melody things become more familiar. The extremely short interlude gives the song a psychedelic mini twist. The song is bouncy, yet without joy. The singing is downcast, giving 'Wishing Well' its own distinct flavour. Setting it aside from the fold in a positive way.

Tom Hughes sings the second original, 'Ennui'. Again the song is an electronic composition, with the melody and vocal providing the free flowing element. What catches my ear is how good Carol Cleveland Sings manages to set down an atmosphere of long ago with instruments of today or at least from a later date than the mid 60s. It may well be that the sounds come from "ancient" synthesizers.

The covers range from Sparks, to a Russ Titleman/Gerry Goffin composition and Van Dyke Parks. Each captures the mood of the original. The jumpiness of the Mael brothers, the 60s vocal girl pop and the seriousness of Van Dyke Parks, his love of 50s music, including his influence on Brian Wilson.

To be honest it does really divide Wishing Well in two halves. The two originals are set very much apart from the three covers. Together they paint a picture of Carol Cleveland Sings that is very delightful. Perhaps not for every day, but certain a regular diet could be prescribed.

In June the duo released a new single on Bandcamp. The 60s French pop comes through even more evidently. Check out 'Run To Your Bedroom' also, is the advice of,

You can listen to and buy Wishing Well here: