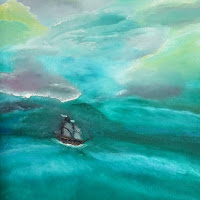 Setting Sail indeed, as you can see. Natalie Ramsay came into my life though the review by Erwin Zijleman late 2014. After that she found her way to this blog in several guises. Not only that, she tipped me about several people she works or worked with, who all found their way to this blog.

Only recently I found out that there is a follow up to her excellent album 'Fly To Home', released already in October 2015. Quality doesn't deny itself anything so also not a review three quarters of a year down the line.

Natalie Ramsay made this mini album with her friend Jasmin Lynn Frederickson. Together they sing like a dream. Where Natalie's voice is already extremely pleasant to listen to, it gets this extra quality because of what Jasmin does next to and behind her. The true duet 'Almost Always' is so beautiful, forceful and silencing. The two ladies show what they are capable of and all I can do is just listen in awe. And then there are these little moments when Tim Claridge joins in as well.

The music is all in the slower register of music. Modern hippie folk may describe the music best. There may be several direct lines of influence to a song like 'The Alchemist', but it transports me directly to David Crosby's 'Triad' on Jefferson Airplane's 'Crown Of Creation' album. The same goes for the guitar playing on 'Aurora Borealis'. 'Coming Back To Me' comes to life straight away. Two strong folk songs that Natalie Ramsay matches here with ease. Old shit, you say? Yes, of course, but two songs that are extremely dear to me for several decades, so there is a complement in here.

Setting Sails is made with a fairly small amount of instruments and modest means. "Together we recorded them in a little closet in our house", the Bandcamp text reads. The huge sound is another compliment that can be made here and a testament to the DIY techniques that are available these days.

Again I'm, well no longer surprised, impressed so much. Not just with this record, but with Hymalayan and Death Goldbloom as well. Bands where Natalie Ramsay plays in respectively does background vocals. The quality is equally high, the talent so huge. Setting Sail is a mini album the whole world ought to hear, but somehow I doubt whether that would make Natalie Ramsay happy, knowing what expectations and obligations come with (huge) success. Again this album deserves this amount of success. Together with 'Bliss' by Californian singer-songwriter Shane Alexander, that was reviewed yesterday on this blog, I simply haven't heard a lot better than this lately. As I started this post, "Setting Sail indeed".

You can listen to and buy Setting Sail here: