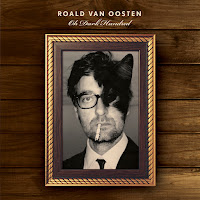 Does coincidence exist? Very recently I heard a singer and thought of Roald van Oosten and in the same second I added another thought: will there ever be a new album? And look, here it is, Oh Dark Hundred.

In 2007 'Caesar', the band Caesar's fourth studio album, and last it turned out, made it to the first position of my WoNo Magazine end of year list. An album in which all that Caesar stood for seemed to come together. Perhaps that was also why the band called it quits. It may not have been able to ever get better.

This is proven in 2016. Oh Dark Hundred is not better than 'Caesar'. It just doesn't compare, but wait, that is meant as something positive. Van Oosten takes us on a trip down memory lane. The music is laidback, relaxed, in an indiepop kind of way. His strange, high voice is the lead instrument on Oh Dark Hundred. It is singing "to beat the dark" and "straight from the heart". And it shows. Although I had to get used again to his voice after so many years, it is landing again after a few spins.

My review does not need to be long, there's no need to go all-out in-depth. Oh Dark Hundred is an extremely sympathetic album, with the right kind of alternative melodies, all spiced by that voice. The keyboards give it a hint of the mysterious, like ghosts flying through a wall in an old, haunted English castle. There's no need to be overly alarmed, it adds to the atmosphere.

Van Oosten refrains from real rock outings, and keeps his songs in the slower to faster midrange. The challenge is to keep the songs interesting over a whole album, and I have no reason to complain here. Most songs have a distinctive feature that make them stand out. A mysterious keyboard, a piano, bringing his voice more forward or an interesting lead guitar. They do the trick.

Over the past years Roald van Oosten may have written several original soundtracks, that is something that does not reach me usually. Not all soundtracks come from 'Jesus Christ Superstar'. So for me Oh Dark Hundred is a return to form. This album is not a new 'Caesar', for that it is too tame. The album is a lot that I'd hoped for in a new album by either Caesar or Roald van Oosten solo though. So enjoy.

You can listen to the album teaser here: