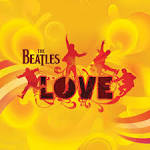 This morning on the news the message came that George Martin has died at the age of 90. The man who in all the pictures concerning The Beatles was the only one wearing a suit, shirt and tie, as if at the office. Which he, as EMI/Parlophone producer, was.

Whatever else George Martin has achieved in his life, he will always be remembered as the producer of The Beatles. The man who made The Beatles possible in the first place and assisted them in growing musically in whichever direction they decided to go.

Enough has been said and written. There's is nothing that I can add that will make much sense, except to thank him for that beautiful body of work that he helped creating. Music that I will cherish for the rest of my life, that is part of my DNA.

There is that album called 'Love' in which he was allowed by the living Beatles and the estates to remix The Beatles songs as he would have liked them to be. Assisted by his son, as his hearing was starting to fail him, he mixed a tremendously fun album. 'Love' does both producer and artists right, fully respecting the original body of work. Hence the picture accompanying this short In Memoriam.