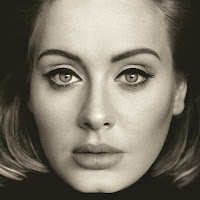 It's months ago that I wrote this post, just after the new year. Why publish something so negative when there's so much positive news on music? After months I put on 25 once again to listen whether I had heard wrong. The volume turned a bit up, deliberately, to find out whether I'd hear things I'd missed. Admittedly I found some more dynamics in the music, but after what I think is the best song of the album, 'River Lea', I gave up. So here is the original story any way.

It is some years back by now that a now ex-colleague wrote in WoNo Magazine that he had discovered a new great singer called Adele. Knowing his taste, it was something I ignored straight away. I'm not one for R&B singers (of the latter kind, but only slightly more of the 1960s ones). It was only with 'Rolling In The deep' that I was truly exposed to the by then, unavoidable Adele Adkins. She won me sort of over with all the great singles that followed and then 'Skyfall', the best James Bond single to the best James Bond movie. Did I become a fan? No, but I had learned to appreciate the voice of Adele and come to like several of her songs. They had spice, dynamics, were full of life or full of suspense, like 'Skyfall'. Full of life.

And that is what I find missing in 25. '21' Had the same sort of songs as well, but also had the other ones, 'Set Fire To The Rain', 'Turning tables', just to mention two. Life can be found in 'Water Under The Bridge', but that is about it on 25. The rest are all ballads with so little going on that Adele's voice doesn't save a song, for me.

25 May be #1 in the whole of the western world for weeks on end. I truly wonder whether that is on the basis of her reputation.

The song that tops all on 25 is 'River Lea'. This song allows the gospel element that makes most songs of Adele so exciting. The guitar notes in the background even give the song a U2 feel. One of her better songs for sure.

The big single is 'Hello', of course. Number 1 (and then there's this Bieber fellow), huge, but it doesn't have IT. I wasn't impressed, like 'Rolling In The Deep' impressed me back then.

Is it true that an artist can only come to his biggest successes when in deep turmoil and/or personal pain? No, there are examples of the opposite. Perhaps for Adele it is the case. Time will tell.

No, I'm not an Adele fan, you guessed that right. Still, I had expected more of this album, simply because Adele set such a high standard with '21', that even I came close to becoming one. Did she delve deep enough into herself this time around? Perhaps not. Perhaps this is it. We'll never know.

P.s. as a form of solace for all concerned. My non-performing, every other week playing, nameless band, will take on 'Rolling In The Deep' tonight for the first time. As a tip: listen to the Giel 3FM live version. It's fantastic and you get to see the real Adele, before things went totally crazy for her.

You can listen to 'Hello' here: