Sheep For Fiber. Elenne May 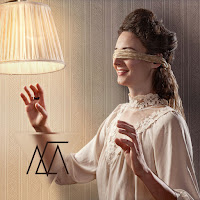 Every once in a while an email reaches the editors of this blog in which a band introduces itself. With this band from the Netherlands it was no different. A great way to get to know new music from bands that otherwise I may never have been exposed to.

Elenne May is a four piece band that is on route towards a triptych of EPs. With one album, 'Misleadingly Soft' (2012) and a few singles to its name Sheep For Fiber is the first EP of the triptych. As such not unusual. It allows a band a few consecutive moments of attention, before the three EPs become one album.

A few noticeable things present themselves listening to Sheep For Fiber. This is a band for people who like to listen to music, truly listen. The music is beautifully layered, breathes space as well as atmosphere, with enough left to discover. The music reminds me of The Future's Dust's first and so far only EP, but also Maggie Brown and I Am Oak come to mind. Like all these bands there is something dreamy, otherworldly in the music they play.

The next distinctive feature is the slightly mysterious voice of singer Elenne Klok. Soft, broken and hinting at unknown things, perhaps even the mystery beyond what we can hear. There is no reason for Klok to raise her voice to impress the listener. As soon as the harmonies kick in it even becomes more pleasant to listen to.

Finally there's the fact that I believe that Elenne May is a talented band. They are not yet at that level, but I'm certainly remembered of Sophie Hunger. The songs on this EP could reach that level through a higher production level in combination with the completely vulnerable beauty that is on display on Sheep For Fiber. Elenne May holds that promise within it. Just listen to 'Ducked Taped Toy Soldier'. It has the sort of atmosphere that graces 'Supermoon', barring the "madness" of Geoffrey Burton.

Besides singer Elenne Klok, who also plays synthesizer, there is Roeland Scherff on guitar and piano, Eveline Ypma, bass and Eddie Jensen, drums. Together they create atmospheres that hint at the XX without the (hints at) dance rhythms that graces this U.K. band. The strangely titled 'The Mistress And The Pictory Camel' is a good example. The dry sounding drums are mixed right in the middle and up front. The bass softly does its things with an incidental one note outburst. The guitar has a lot of echo on it, creating a desolate atmosphere over which Klok whisper-sings. The piano led ending is eerie, ghost like. As if from another world. There's a lot of music, but also a lot which is not there. Left empty. Spaces that are part of this music.

In the final song the band finally lets it rip for just a few moments, which turns the whole EP upside down for a few minutes; "a thorny devil" can be spotted. 'Winter To Winter' is the busiest song by far with its funky guitar and deep bass notes. A sign that Elenne May can go many places in a convincing way, given half the chance.

Finally a compliment for the picture of Frank Wiersema on the cover of the EP is due. He catches the mystery of the music in combination with the obvious fun the members of Elenne May have in creating this music. Exploring without rules up front? It may well be the symbolism shown here. Elenne May obviously has fun and is daring in the approach to its songs. Much seems to have been let out, instead of let into a song. All this is easy to catch when listening to Sheep For Fiber.

Bring on EP number 2 and 3 Elenne May. I can't wait to hear more.

You can listen to Sheep For Fiber here on the band's Bandcamp page: