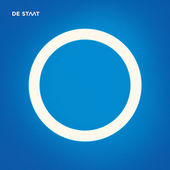 Album number four O is. For De Staat it is an important album. With its previous effort 'I-Con' it seemed to have reached the pinnacle of its sound. The influences were integrated in a most organic way, creating a form of hip-hop rhythms infused industrial rock that could upset every place it was played into involuntary and voluntary movements called dancing. The sound was blown up into humongous proportions, as big as it was organic. That was what made 'I-Con' so good.

With the in between mini album 'Vinticious Versions' the band showed that it could alter its own songs into someone else's. As if The Beastie Boys played De Staat e.g.. So where is De Staat early in 2016?

That question is easy to answer. At the top of its game, but different. The band has let in some pop elements, without losing a centimetre of its own identity. The first listening session is extremely pleasant. O is certainly less confronting, so pleases more instantly. There's no need for me to go looking for the beauty in a thorny bush first.

The second thing that catches my ear is that the sound is certainly more down-sized. The rhythms are there, the keyboard sounds are there, the guitars are there and still it is different. The studio the band built for itself in Nijmegen has a quieting influence on De Staat.

What I'm still deliberating is whether the band simply plays less instruments or softer or that the sound is mixed in a more spacious way creating a wider sound. The effect is that O is less directly in my face than 'I-Con' was (and those albums that went before). 'Make The Call, Leave It All' certainly falls into the latter category. It is poppy, sung high-voiced in the choruses. The typical De Staat elements are all there and yet it is so different. Like a prickly pear trying to please, that comes close as a description. Admire the plant without touching. In the same way I enjoy being exposed to this music tremendously.

Where De Staat excels in, is to play what does not seem obvious to play. Usually that tends to dissonance, but not here. The riffs are not standard but remain organic. The album is full of songs holding stranger rhythms, notes on the keyboard that are not aimed to please in a direct way, but together can make a crowd go mad. Like a typical Carnaval hit of the 70s infused with a load of red peppers in darker, nether regions. Where melody was somewhat neglected on the first two albums, it has risen to prominence since and the mix is what makes De Staat exceptional.

It is a step too far to write that De Staat has reinvented itself. Far from. On O the band manages to achieve the same maximum effect without having to go all out. Over the past now seven years I've followed De Staat with interest, reported on it, albums and live, and can let you all know that the band has released another fine album.

You can listen to 'Peptalk' here: