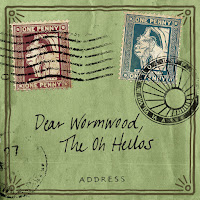 The Oh Hellos introduced themselves to me through the Noisetrade.com website, basically for free, which I traded a review for as I liked there album, 'Through The Deep, Dark Valley' a lot.
(Read on here: http://wonomagazine.blogspot.nl/2013/04/through-deep-dark-valley-oh-hellos.html)

Two and a half years down the road the band is back with its new album, Dear Wormwood and I have to say that I am impressed. Dear Wormwood has a depth that allows for so much to discover with each spin. Superficially I could call The Oh Hellos a hey-ho! band, as I tend to call them, but that would leave so much out of the picture, that it would sell the band extremely short.

Dear Wormwood is one of the best in the genre released to date. Forget about Of Monsters And Men, Mister and Mississippi, The Lumineers and above all Mumford & Sons. This is The Oh Hellos and they do not seem to come better in the genre. (Re-reading my previous review of The Oh Hellos at this point, I notice that I'm repeating myself and would have done so, and may do so, again as I find I stand by my remarks of 2013. Dear Wormwood brings the exact same feelings and ideas to my head. It is always nice to find some consistency.)

Dear Wormwood starts with (a) 'Prelude'. Setting a level of ambition, but also a somewhat mystical atmosphere of which a vocal background is recognisable later on. This mood is kept up throughout the album. There is something angelic or elfish, whatever you'd like to call it, in the music and singing. The songs seem to float on the early morning mist in a forest, catching the first rays of the sun. Creating that scene in which things of reality are missing underneath the mist and all things sticking out on top of the mist. Dislocated from reality. A deer without legs, trees without stumps. That is what I see when listening to Dear Wormwood.

The Oh Hellos do not exactly take the easy way out. Just listen to the way 'Exunt' starts. Crescendos of sound following a line sung by Tyler Heath. All underscoring his exit. It is a song that sticks out, is different, not aimed at direct, easy to digest beauty, but to conquer by the listen. An album full of Exunts would not work of course. Next up is 'Caesar' one of the songs where Tyler Heath aims for the top. In a way as Crowded House could do. Again there are unsuspecting turns in the song, leaving so much to discover. Like its title 'Caesar' is majestic. Elevated. Floating through space and time.

The Oh Hellos, next to Tyler there is his sister Maggie, joined live by a host of musicians, are three albums (and a Christmas EP) into its career. The growth on display is phenomenal and will lead to getting better known by the album. Dear Wormwood is another leap from 'Through The Deep, Dark Valley', that it makes me wonder where this will stop. The quality is enormously consistent on Dear Wormwood. The musicianship is great, so is the singing and the recording.

The final connotation I have is with sacredness, with old church music. Just listen to 'Pale White Horse' and you will hear what I mean. Maggie Heath sings in such a divine way (and reminds me of Maggie Riley in 'Moonlight Shadow'). The sort of seriousness that was present in English folk of around 1970 too.

Summing up, The Oh Hellos have done it again. Dear Wormwood is the ideal follow up to what came before. Progression in all the ways I like a band to show with a new record. Keeping what was good and evolving towards new heights. All can be found here. Now it's your turn to find out.

You can listen to 'Audiotree' live here: