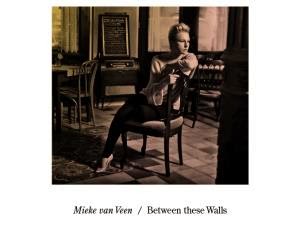 In the past year Dutch singer/songwriter Mieke van Veen featured regularly on this blog. First as one of the artists on a singer/songwriter evening in The Hague that I went to because it was the only chance I had of seeing Shane Alexander play that time around (and the rest of the year it turned out). Mieke van Veen caught my ear (and eye as the review showed), especially with 'Riverside'. That the interest for the post was mainly through Mieke's fans was proven by the fact that our review of her debut album 'Between these walls' (read here: http://wonomagazine.blogspot.nl/2014/11/between-these-walls-mieke-van-veen.html) was the second best read post of 2014. We met with Mieke at a singer/songwriter event in Leiden and made an appointment for an interview.

As not all readers of this blog may be familiar with you, how would you like to introduce yourself?
My name is Mieke van Veen, I’m a Dutch singer/songwriter with an americana sound.

You have worked for years towards the moment to release your first album. In what ways did the release influence and/or change your life?
The whole process of making an album has been a lifetime experience, a rollercoaster ride. It took me 2 years to finish 'Between these Walls' and I’m really proud of it. The best musicians Holland has to offer worked with me and I feel blessed. My release was the perfect ending of that process and it also marks a new start. Finally people can hear what I have been doing the last 2 years. Also I have the time and freedom now to write new stuff.

Your music has a distinctive mood around it. I’d best describe it as melancholy.  In what way does your music reflect who you are?
I love that melancholy mood. You can dwell in that lonely, lost feeling, but in the end it always has a positive side. That’s me, I always look for the positive in life. But I’m not a moody type at all, you can ask my kids. They will say their mom is a funny, bit crazy and outgoing person, haha.

In what mood are you when you’re creative?
A lot of songs on my album, 'Between these walls', reflect on what I’ve been through, or what I experienced around me. Like the song 'Long Gone' I composed on my piano on a day I met a close friend who’s mother was slowly fading away by Alzheimer's disease. Such a cruel disease. I Just imagined how it felt and wrote the song.

What influences your writing most, happy or sad? I’m personally under the impression that it’s both.
Both!

Your songs appear to be personal, some even messages to someone close by. Do you write from a personal level or are they more personalised observations?
It’s always personal. Even if the topic is not about me, it’s about the way I see it.  'LOW' is about a mother who cannot let her ex-husband go. She will do anything to make his life miserable. At a point where she will use her own kids to do so. And the cruel reality is, her actions won’t  make her any happier. In the end it’s the kids who suffer the most. As a mother of 2 I have little respect for that.  But those stories happen every day.

On stage you said that ‘Riverside’ is based on a family history. Would you like to share it with our readers?
It’s about my grandparents. They lived in Indonesia when WWII  broke out. My grandmother was pregnant of my father at that time and already had 2 little daughters. My grandfather was captured and thrown in jail. My grandmother tried to run away but it was too late. Together with her sister, she was detained in one of the Japanese camps. My father was born there. My family suffered so much, but they survived. It took about 4 years before my grandfather saw his firstborn son.

When reading about you the name of your brother Bart* pops up sooner or later. If so, in what ways does it help to be identified with him?
It doesn’t help getting me further in the music business, if that is what you mean. My brother is a very talented songwriter, but he likes to be in the background. A lot of people don’t even know him. Sometimes people ask me why I don’t sing his songs, but we just both love writing; and I love performing as well. As a brother he means the world. We have a special bond. When I was still studying journalism, we even lived together. Bart helped me with producing my first EP, ‘Mica’sMess’. Thanks to Bart I know a lot of awesome musicians who like to work with me. On my debut album I decided to work with producer Budy Mokoginta.

* Bart van Veen is a songwriter with several hits and songs for Anouk to his name.

Was music important in the home you grew up in and if so what are your earliest influences?
Yes. My parents wanted their kids to have a musical education (as well as sports). So I played the mandolin and hobo. Both classical music. When I was about 15 I grabbed my brothers guitar and just started playing without knowing the chords. And I still don’t know what I’m playing. I don’t need to. Rather let the sound lead the way.

You perform alone, as a duo, trio and with a large band. How do you manage all these different settings and which one has your preference?
I love those different settings. Depending on the kind of venue, I decide how and with whom I can perform. The musicians I play with are all very talented, so it’s easy to play with them. It’s awesome to hear how those guys give my songs more depth. But solo on stage is easier for me, cause I can improvise how and when I want. I can change my setlist and play songs I don’t often play.

The basis of all your songs is one woman, one guitar. On record they are fleshed out, some more, some less. Do you know up front how a song will or should develop or does this come later in the process?
Not always. It really depends on the feel of the song. Some of them where already finished just the way they where. Others I felt could use an extra touch. I took the time to figure that out along the way, together with my producer. So when we got in the studio there was enough freedom to change things and use the creativity of the musicians. Even in the last process of mastering the songs we  changed things. Cause eventually it always comes down to the song, the story and my voice.

The final song on Between these walls, ‘Lege handen’, is in Dutch. Hidden away as it were. You decided to sing in English. Why not in Dutch and what is the story behind the one Dutch song?
About two years ago I was working with a theater director for a performance at Fringe Festival. She challenged me to write a Dutch song. 'Lege handen' ("Empty hands") was the result. And when I play it live a lot of people love it. So in the studio we jammed a bit with gitarist Menno Gootjes on guitar, and it sounded awesome. So we recorded it. So I decided to put I it on the album as a hidden track. Maybe in the future I will write another Dutch song, but don’t expect a Dutch album, haha!

What can we expect from you in 2015?
I’ll be performing a lot! Hopefully I’ll be playing on some beautiful festivals upcoming summer.  I’m  planning a little tour in the USA somewhere in September. Probably NY city (I was there 2 years ago when I wrote 'Traffic Jam'). And I’m writing a lot of new stuff. I will start working on my new album at the end of this year. And I’ll promise you, more happy songs ;-)
Gepost door Wo. op 08:21