Heat death of the universe (2). Bunnies on Ponies 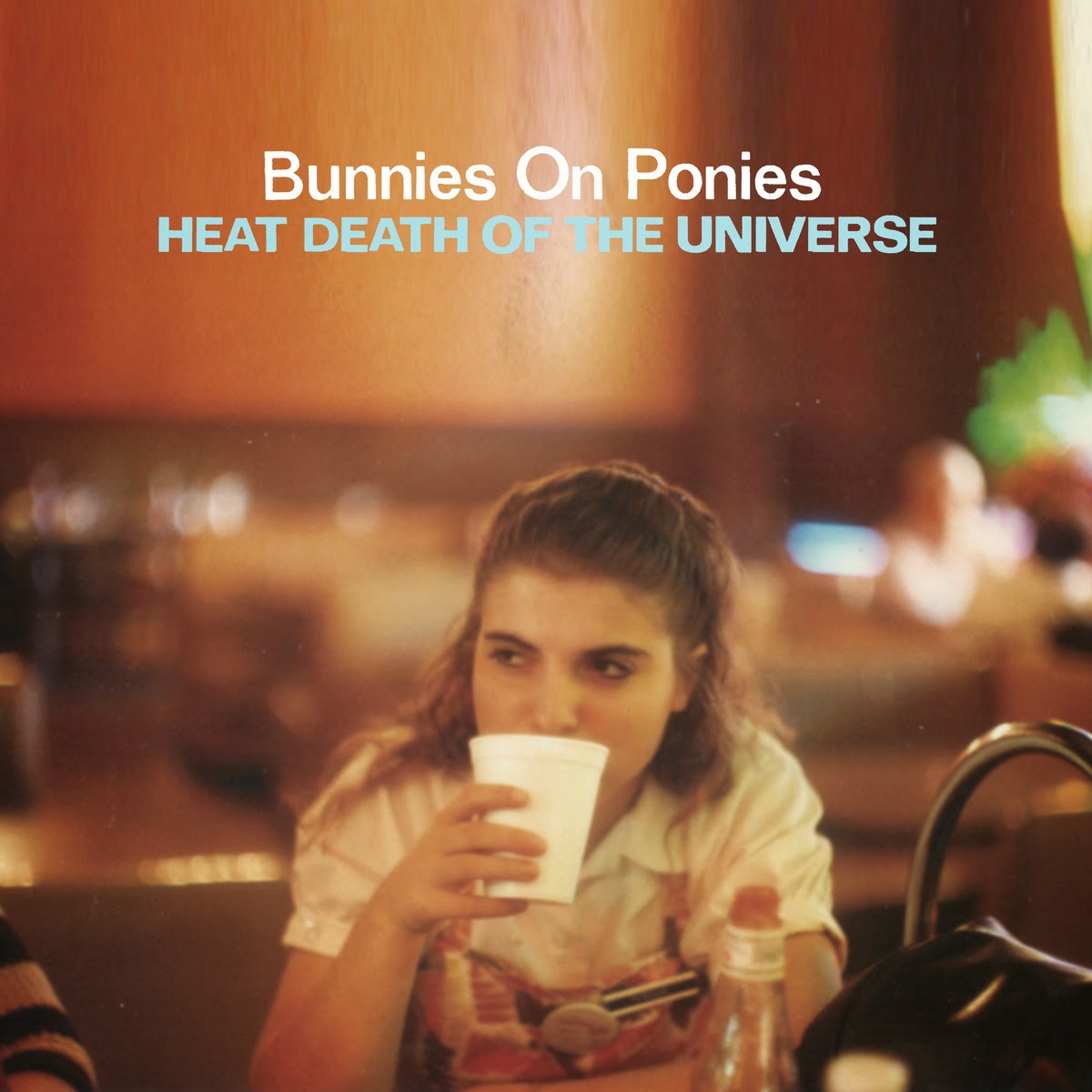 Heat death of the universe kicks of with the fun guitar eruption called 'Castle Van Halen'. Something that brings Dinosaur Jr. to mind, a more poppy version, but loud enough variation of that band. The light is let through the texture of the song, thus creating a best of both worlds kind of song. Eddy and Alex may or may not be living in a castle these days, this castle rawks out. The amplifiers up to eleven and see what happens when a note is let loose just this little too loose. Add another effect pedal and the whole thing explodes, while still colouring between the lines, if only so barely that the Kindergarden teacher may just not notice. This indie rocker has nothing to do with the hardrock moloch of old.

Bunnies on Ponies is a band that Samuel F. Scott does on the side of his other band. Together with Tom Callwood on bass guitar, backing vocals and Craig Terris on drums, percussive instruments and backing vocals he created this wonder of indie rock (songs) that jumps in all sorts of directions a long as there is a huge element of fun mixed into the songs. His first and main (?) band, for certain first band is The Phoenix Fondation. Next to that Scott released two solo albums to date. Since 2004 he's active with Bunnies on Ponies in order to record songs that do not fit The Phoenix Foundation. Heat death of the universe is the band's third to date.

Heat death of the universe is not exactly a one trick pony. A lot of the songs sound very different to each other. Let's take 'Destination Newton Park flats' as an example. The Clash in its 'Sandinista' days. No punk left insight except for the attitude. Loads of echo on the voice, sung as if permanently high, a rhythm that sets the song apart as does the whole atmosphere, including the free jazzing saxophone. A weird but great track.

Sixties garage rock is a genre Bunnies on Ponies are quite familiar with also. Loud guitars and drums, but never forgetting a good singing melody. Just pay attention and the oohs and aahs pop up in corners of the mix, as do full harmonies here and there. Adding to the fun and atmosphere of the record. 'Baked' has this loud drum part, with hard pounding and muting of a cymbal, filling the whole song on its own, nothing subtle about it. That is all in the vocals.

Halfway through I'm wondering whether Heat death of the universe is the indie rock version of The Beatles celebration called 'Catch-all' the band Swag produced circa 10 years ago. Heat death ... is less one dimensional, but still. Bunnies on Ponies celebrates a kind of music, honouring it, but also adding, just like Swag did. And having just as much fun.

When the band plays with the reckless speed off, like in 'Only thing', the ballad Bunnies on Ponies style convinces easily. The relaxed intro with some delay on the guitar. the change when the rhythm section kicks in. Slowly some madness creeps in, a little Radiohead. Or in 'Spectrum where the acoustic guitar allows the bass to come forward, that is plopping away gently, adding a convincing part to the song, while slowly other fun parts are added ending all in a loud guitar solo bringing 70s powerpop bands to mind.

The moodswings add to the different flavours on the album. Something for everyone or so it seems, but unfortunately for Bunnies on Ponies things are not that simple. From Wilco, minus Nels Cline to The Romantics, fans will find something to their taste and a lot more. Heat death of the universe is a rich album, made for the love of this kind of music.


You can listen to and buy Heat death of the universe on the Bandcamp website of Bunnies on Ponies: