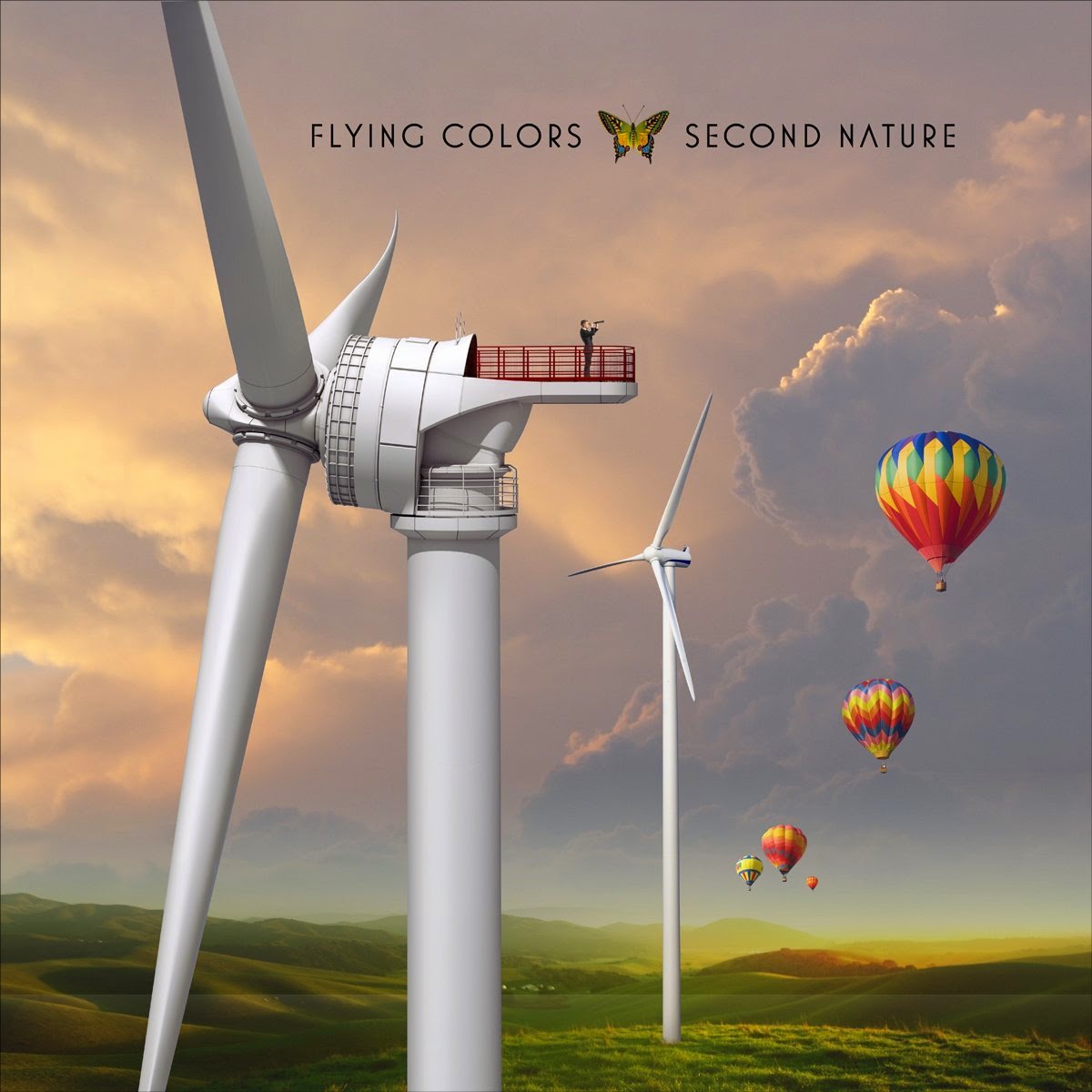 In 2012 the first album (http://wonomagazine.blogspot.nl/2012/05/flying-colors-flying-colors.html) by this super group made it to my favourites of the year. Quite surprising actually as prog rock is not my thing; with a few notable exceptions. Second nature was on my to listen to list for a few weeks already, but somehow did not get to the top. Tonight it did and boy am I glad that I put it on, finally. To write that it blows me away is exaggerating but only slightly. It does match the storm I woke up with this morning for sure.

My first impression, and at this point into the review I'm listening for the very first time to Second nature, is that this a varied album. Extremely powerful and played by a band which is not afraid to do something different. There's even a Led Zeppelin like folk song with an accordion in the set. I can echo myself somewhat as Second nature sounds so fabulously good. The album has a warm, full sound, to totally submerge into. There's a lot going on at all times and again Flying Colors presents its listeners with a high mass of symphonic rock of the past, now, 44 years. This band knows exactly what it's playing and can echo famous sounds of the past as easily as create a few of its own. Flying Colors is a band filled with veterans of the second and third prog generation that know their way around in this music, like it's their backyard. Although that slick lead guitar solos are all over the place, most other things compensate more than enough for me.

As such, answering my question of the previous review on this band, I have a strong impression that Flying Colors is a sort of tribute band with its own original songs, but a tribute band none the same as they weave familiar sounds and breaks in their songs that are odes to heroes of the past, some dead, some living, some even still touring and making less noticed albums. From Pink Floyd to U.K., from Led Zeppelin to Yes, all these British prog rock acts come by in a more modern sound and sometimes infused with some good old U.S. rock up the rectum. (Yes, this is a reference to recent news, you got that right.)

The album starts with just a piano part. Small for Flying Colors, when the guitar starts copying the piano part things shift and some good old jazzrock parts come by. U.K. (Bill Bruford on drums), King Crimson (at times with Bruford as well) and Yes (again in the early incarnation with Bruford as well) all come by. Not that Second nature is a Bill Bruford tribute album, for that too many other things go on (melodically), but some of these complex rhythms I only know from that guy. Jazzrock never was my thing. Too complex and a-melodic for me. The almost 13 minutes 'Open up your eyes' holds it all. A near brilliant combination of complex rhythmic acrobatics and melodic parts, with a centre spot for guitars and keyboards. Some nice bass runs and the drums mixed straight in the middle. Over all that the singing of Casey McPherson with his very pleasant sound, backed up here and there by some great harmonies. Behind a song can go of in any direction. McPherson doesn't care. He brings it all back into the fold a soon as he starts singing.

Flying Colors manages to be much more direct also. 'Mask machine' the album's first single is a crass rocker with distinct Queen influences. Steve Morse manages to send a telegram through a 1000 notes per second Morse code. One of those forceful solos Second nature holds, next to tight rhythm playing and some wild riffing. There's so much going on. I'm holding on to my ears half of the time listening to the album. 'Bombs away' does the same trick. Strong rock with some higher singing. It is a song like 'Bombs away' that make me like Flying Colors better. Rock, some hints at prog and a good melody. It's the mix that works for me.

The mix of styles on this album is attractive also. 'The fury of my love' could sort of have been sung by Frank Sinatra, like it is easy to imagine Steven Tyler putting on his fog horn. McPherson does not have that much power in his voice, but a lot more pureness and ease. 'The fury of my love' is a ballad like they used to make in the 80s.

The shortest song on Second nature is 4,40 minutes long. ' Lost without you' is another ballad, but with some more guitars and stronger drumming with nice rhythmic side steps, taking the song steps forward with each small adventure.

The Celtic sidestep is called 'One love forever'. The least successful experiment in my opinion. It just doesn't blend with the rest of the album.

The last two songs on the album almost take 20 minutes. 'Peaceful harbor'. Another ballad that starts very soft, but ends like a Pink Floyd song, sound, backing vocals and all. 'Cosmic symphony' is another long song built up out of three parts. Slowly the song gets a more threatening undertone working towards a climax, that is short lived. In fact it gets more subtle after the extremely short release. A little jazzy even with a nice electric piano. Again violins come in, before Steve Morse goes off on another great guitar solo. The strong point of 'Cosmic symphony' is its restraint. Where the opening symphony 'Open up your eyes' goes all out, 'Cosmic symphony' goes all out in a different way. It simply shows how good and versatile Flying Colors is (also) when playing and singing without finding extreme difficulties in the rhythms etc. 11+ Minutes the band keeps my attention with a song, easy.

Flying Colors may be a band who's members have a million other things to do. When they come together they are more than the sum of its parts. This is a real band, even if the members may see this as a side project. Another impressive album is the result.

You can listen to 'Mask machine' here: