Everything will be alright in the end. Weezer 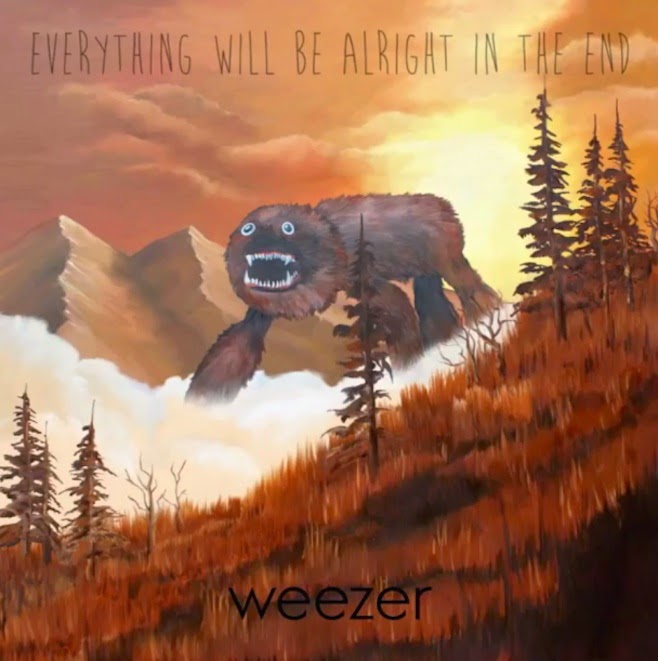 Weezer is one of those bands that can go either way with me in a tremendous form. Either I totally love it or I chuck an album away at first listen. That sort of happened with a few of its albums and for 50% of its debut album, the blue one. The great, famed 'Pinkerton'? I can't remember caring much about it, but perhaps it's time for a reassessment. There is a faint recollection of recent album with some dance influences, horendous.

Weezer is a band with a couple of great pop rock songs, some of which border on metal with a pop twist. 'Hashpipe', 'Beverley Hills', 'Isn't it a pity', 'Buddy Holly'? Great songs with a sluggish guitar hacking away at the rhythm. Everything will be alright in the end is another of Weezer's albums that sits quite right with me. Loads of big old guitar songs at the highest Weezer level.

Except for the hideous cover that is. If it´s only the cover I can start complaining about, a band can be quite happy. Unless it just loves the cover and does not care overly much for the music of course. I am totally confident that Rivers Cuomo gives a lot about the songs on this album. If this isn't pure inspiration, nothing is. "Rocking out like it's '94", he sings in 'Back to the shack'. it is easy to read more into a sentence than is meant, but to me the message is 100% clear: This is the best there is on offer, just like 20 years ago.

Why? Because the riffing, the songs as a whole sound urgent. Like there is no time to lose. Over that tight set of songs, Rivers Cuomo delivers some fine melodies. A US rock version of 'Fountains of Wayne'. Everything will be alright in the end is right at that level. The songs all are at a scarily high level. When in the mood and with the time to do so, I can totally submerge myself in this album. Together with Brian Bell (guitars), Scott Shriner (bass) and Patrick Wilson (drums), front man Cuomo has made his best album to date, as there isn't a single weaker brother among the 13 songs on Everything ... A few songs may be a bit corny, the quality is unmistakable.

'The British are coming' is such a song that treads on a very fine line. Exactly at those moments that I think the song is going to take a wrong turn, it takes the right one. Simply by introducing a bridge or another twist that makes 'The British are coming' interesting. 'Cleopatra' is another example. Close to tacky, brilliant instead and unforgettable. The kind of song that refuses to leave the head, even if asked in a friendly way. Weezer comes up with some fantastic ideas, that make a song memorable.

Let alone the great rock songs that open the album. Simply among the best Weezer recorded to date, together with that few real classics that I just know for so long and don't want to let go easily. The guitars are dark, sluggish, yet melodic. The sound Weezer must have patented. In 'Go away' all this comes together again, with the addition of Best Coast's Bethany Cosentino, who gets co-credits for the song. A nice duet and a stepping stone to 'Cleopatra'. Another song with a hidden acoustic guitar in the mix, giving the song this little extra body. The metal piece in the middle and the end, provides such a kick in the ass of 'Cleopatra'. I just love it.

The album ends with a real trilogy. 'The futurescope trilogy'. Weezer rocks out again, with some more pretensions, that is true. The band delivers with the large, huge intro 'I. The waste land'. Queen certainly is an influence here. This gets even more noticeable in 'II. Anonymous'. The piano intro is a Freddy Mercury tribute, after which the song takes another direction, different to what most on Everything ... sounds like. The "hey" part is a little too Green Day to my taste (for Weezer as I like a lot by Green Day). 'III. Return to Ithaka' ends this album in style. (If anyone reading this happens to return to Ithaka, N.Y., say hi to Penny Jo for me, if she's still around.) Another instrumental that jumps all over the place, but convinces without any hardships. A great ending.

Everything will be alright in right in the end is a return to form for Weezer. Nothing more but certainly nothing less. I never heard a more consistent album by Weezer to be honest. Yes, I've already pressed play again and am listening to 'Ain't got nobody' again. Let's rock out some more!

You can listen to 'Back to the shack' here: