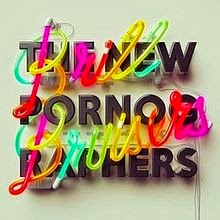 There are days that the introduction to a new album by a loved band is nothing but immense joy. While I was aware of the fact The New Pornographers had released a new album, I sort of forgotten it. When I finally ran into Brill bruisers and put it on it was love at first hear. What a feast Brill bruisers is. Everything seems to be in the exact right place to make Brill bruisers a feast for the ears. A feast of pop, rock, singing, harmonies, everything.

The New Pornographers came into my life with 'Twin cinemas' (2005), an album I picked up because I had been introduced to A.C. Newman's solo album 'The slow wonder' the year before. Brill bruisers is the follow up of 2010's 'Together'. Somewhere after that I saw the band play in Utrecht. After hearing Brill bruisers I got my tickets for the new tour asap. Sunday, Melkweg, Amsterdam.

From the very start Brill bruisers catches the listener by the throat and doesn't release before the 43 odd minutes are over with just enough room to catch a breath in between. Title song 'Brill bruisers' has a superior beginning. During the few seconds intro I already knew it was time to start listening seriously. Producers Newman and John Collins have chosen a firm, tight and full sound for the album. With the vocals put clearly on top and in front of all. The drums stand out firmly as well. All other instruments envelop themselves around the skins of the drums, that are firmly mixed in the middle, and cast themselves outwards from there.

This level is so easily kept up in 'Champions of red wine'. The extra harmonies fly all over the place. The upbeat rock is superb. While sounding commercial, the song is as alternative rock as such a song can come. 80s synth sound, I usually hate, are blended into a great melody and fairly hard-rocking guitars. It's just that the melody is so fantastically good. Quite a winner 'Champions of red wine is'. On the whole it's the alternate lead singing gives the album variation and pace. The fabulous harmonies are the cherry on the Brill bruisers cake. Most choruses are instantly singable.

In the up tempo songs and in the more melancholy sounding songs like 'Backstairs', The New Pornographers come up trumps. All have this inner drive. Not just rhythm wise, which all songs have, but to succeed and mostly to please. And please they do. The right chord changes and melody in all the right places.

There's only one conclusion left. Brill bruisers, an album on brink of pop and rock, is on the top of this game. A high quality is kept up effortlessly 13 songs long. The New Pornographers have come up with another great album. It's time more people become more aware of this fact.

You can listen to 'Brill bruisers' here: