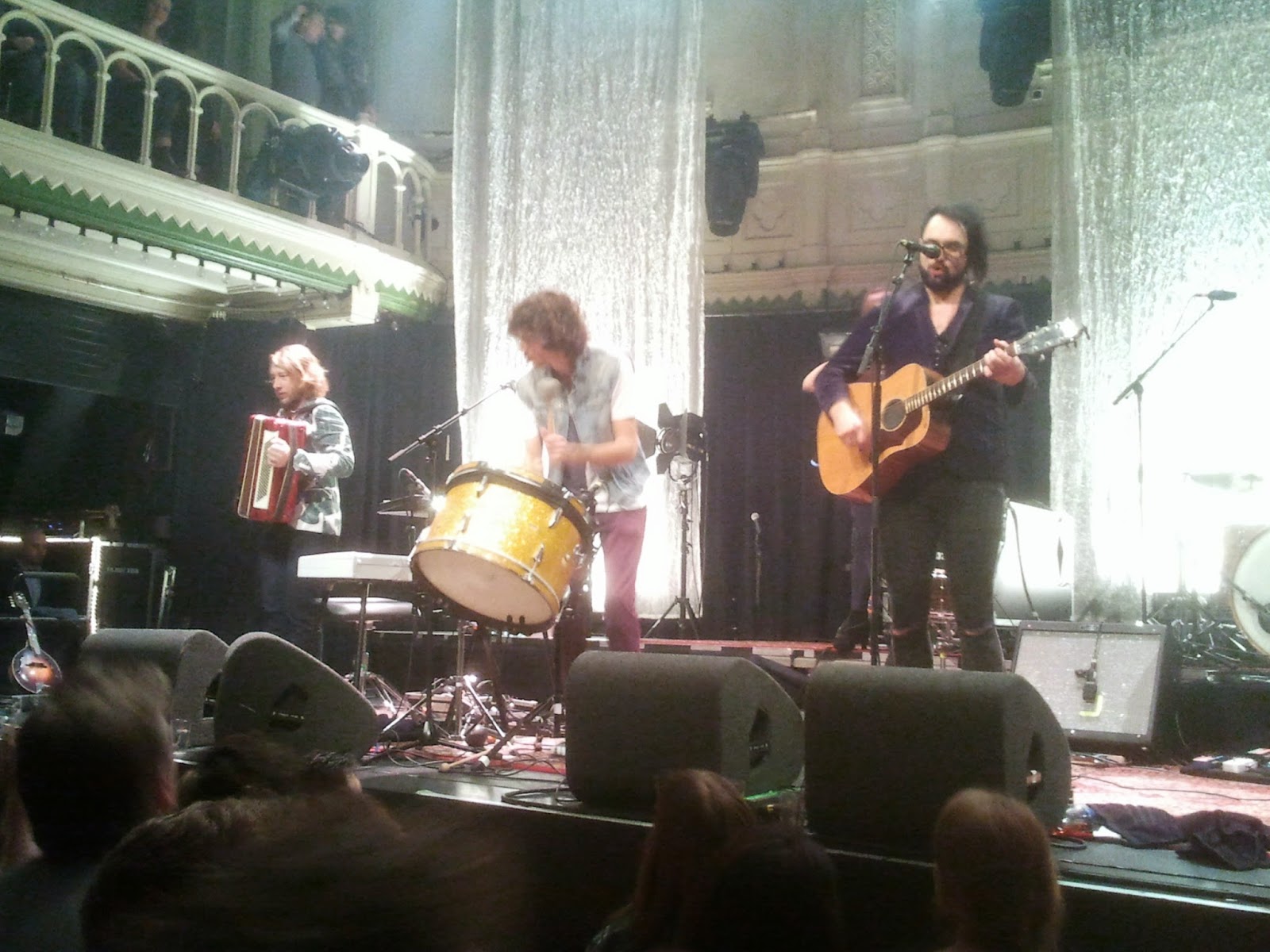 Blaudzun over the past two and a half years since the release of 'Heavy flowers' has become as big as possible in The Netherlands. Excepting another category of singers that you won't find on this blog selling out arena's and stadiums. Blaudzun filled Paradiso and twisted it around his finger. Not totally with ease, but twisted us none the same. The audience surrendered itself gladly to a shy man with a not your everyday attire and looks.

When we entered the former church there was a band on stage called The Indien. In a description I found today the band is compared to Jefferson Airplane, Fleetwood Mac, The Black Keys and Tame Impala. That may be in another universe, but not on this Friday evening in Paradiso. The band failed to make any impression on me. I tend to write something on support acts, as those following this blog know, but I couldn't find a single angle to write about. No harmonies to mention, music without noticable dynamics or interesting twists. There was one song that made me prick up my ears, but that was all. A nice girl, at least from a distance, singing nicely but without a destinctive voice from behind an ancient looking keyboard and three nondescript musicians on guitar, bass and drums. The Indien may get there but still has some steps to take. 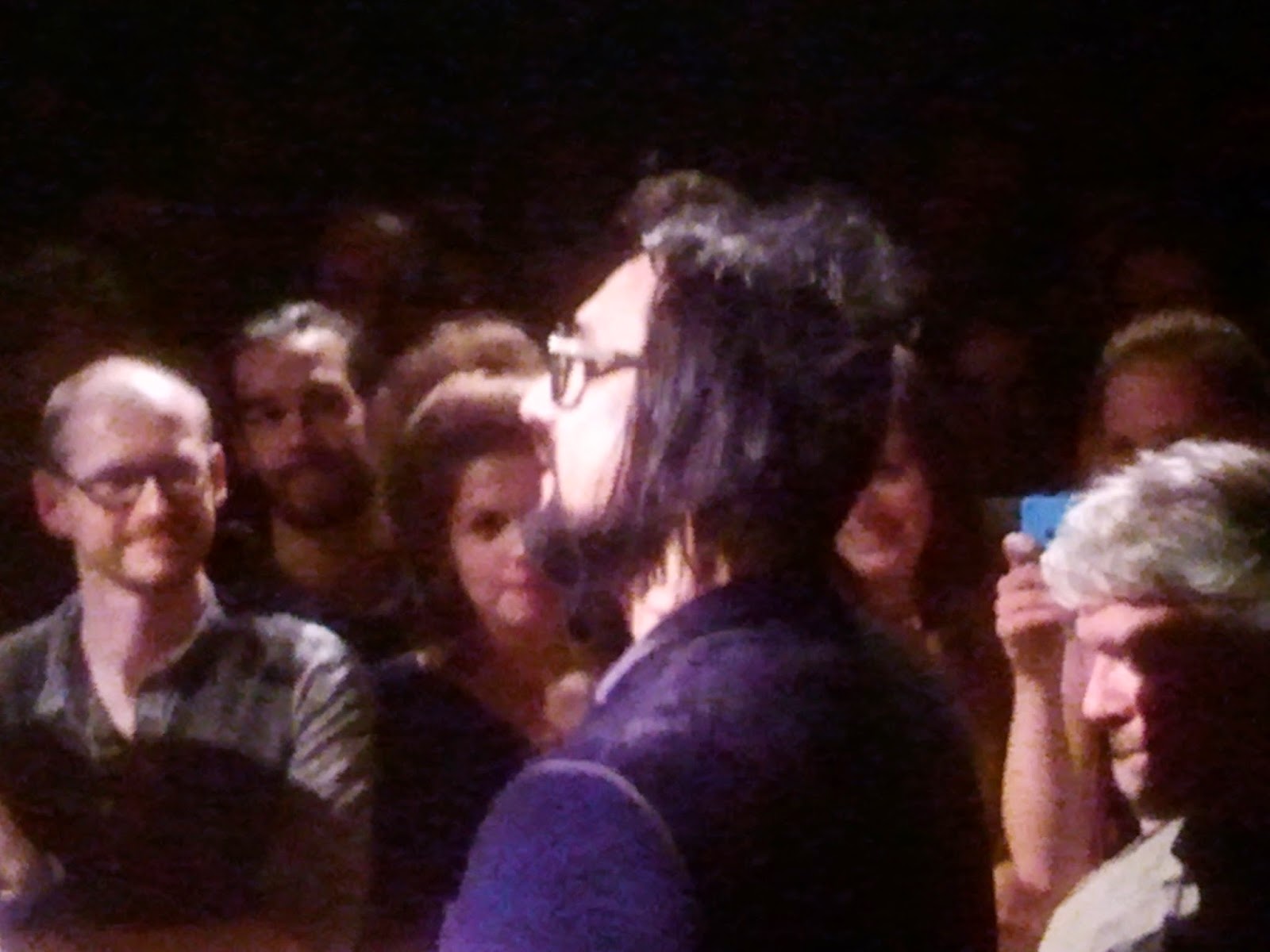 Blaudzun came on stage with an eight piece band extended with two (extra) violinist in some songs. Not so different from Haarlem in 2012. The main difference was, as far as one can recollect such things, that the band cooked up storms every once in a while this time. The dynamics were extreme. From full force to Johannes Sigmund with a ukulele alone in the middle of the floor among the audience or singing on stage without a microphone.

There were enough opportunities to participate as well. The first ever whistling only the end of a song by the crowd and band. Nothing else. It took a while before that one got picked up, but picked up it was none the same. I couldn't help laughing every once in while, as happened on stage also. A whistling audience. An impressive moment by the way. 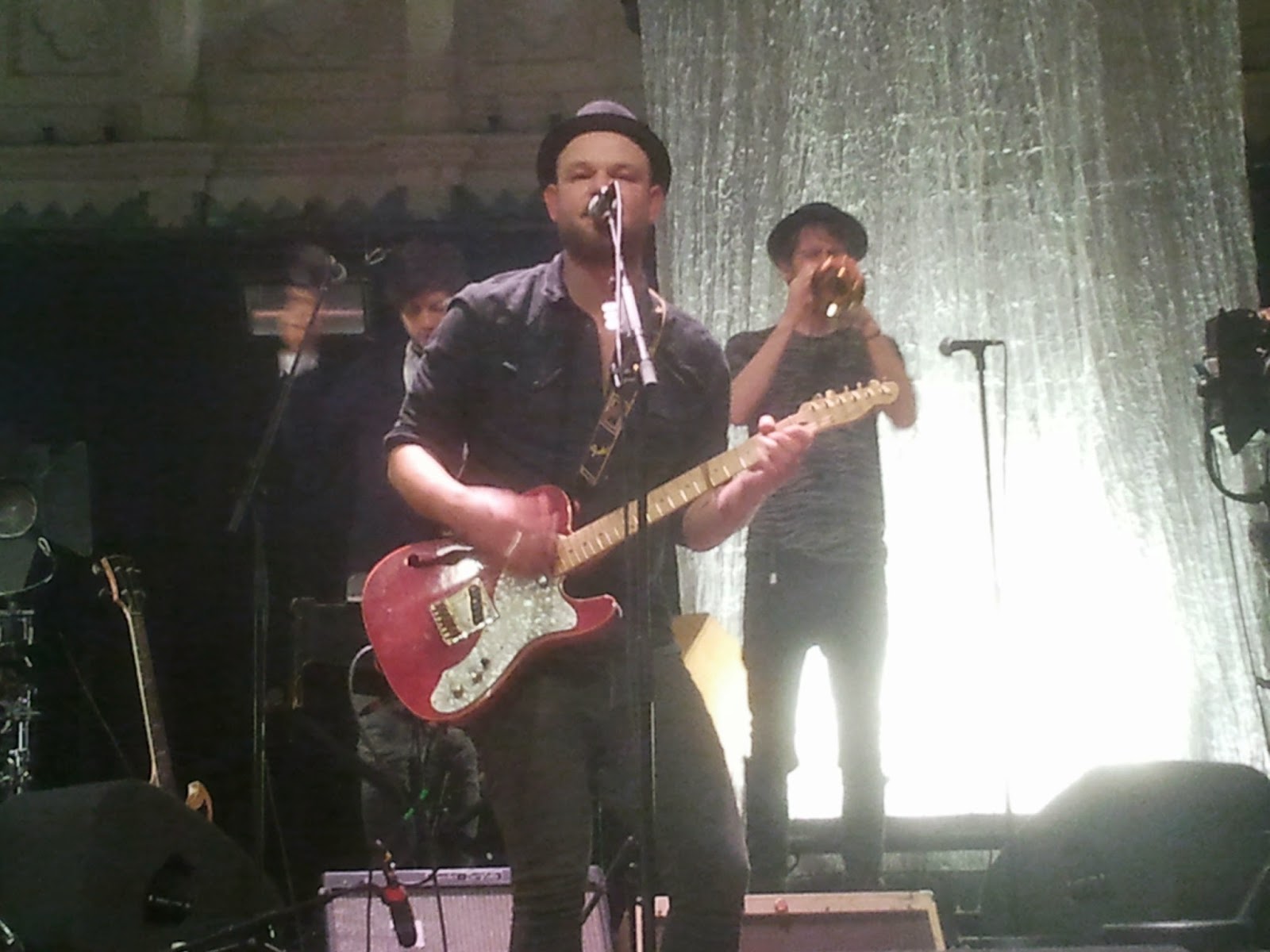 That was not what the audience had come for of course. That was the music. The title of my previous Blaudzun live review was "World get ready, Blaudzun is coming' (http://wonomagazine.blogspot.nl/2012/03/world-get-ready-blaudzun-is-coming.html).This still rings true. The music Blaudzun presents is powerful, different and imaginative. From total emptiness to a wall of sound, it's between these extremes the music of Blaudzun plays itself out. All songs are filled with instruments with distinct roles. All play a motive or sequence of notes or strum chords. Not one steps forward in the form of a solo, each has its own part building a song up to its final incarnation, over which Sigmund sings his songs. Although it's impossible to ever change a first impression, the second one is quite good again.

At times the storm from the stage got so loud that I just closed my ears totally. What happened then was great to notice also. The bass appeared, I all of a sudden heard the violin clearly. What mainly disappeared was what I thought was the distorted violin, but must have been the sound the stage hippie produced from behind his mysterious flight case. The enormously loud whine going over all else played. 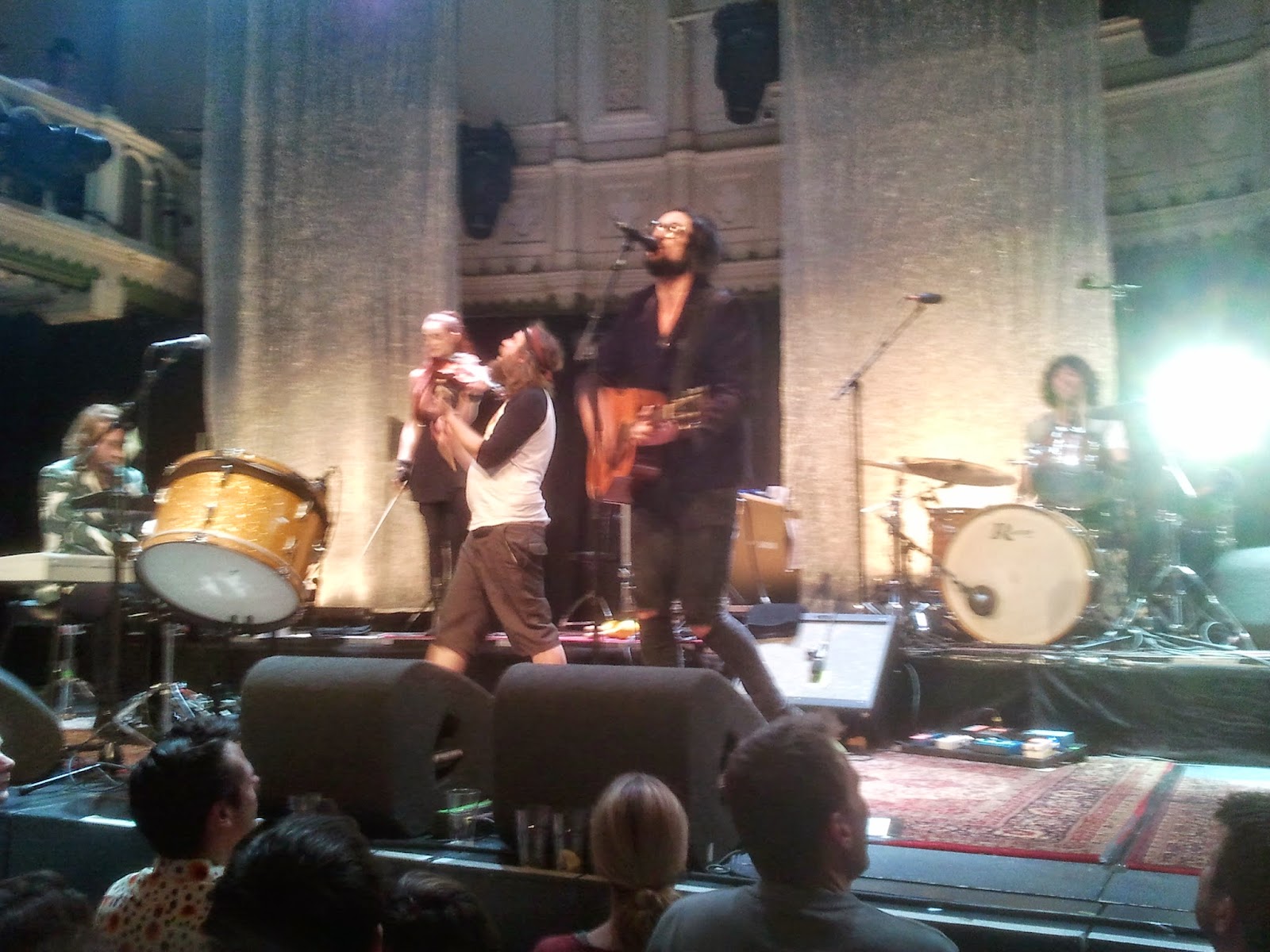 The stage hippie, a big bellied faun dancing like a ballerina over the stage bare footed, was something different to view. The hairdo of Johannes Sigmund falls under that category also. Like somebody has played a prank on him in his sleep, but he hadn't viewed a mirror yet. That doesn't interest me. The quality of the music on offer was superb with many a magical moment that came by. Music that is made with all instruments on hand. Several of the musicians switch instruments or play a simple or more complex piece off percussion when a song calls for it.

The setlist was not directly what one would suspect up front. Blaudzun is not afraid to play softer songs towards the end of his set. From up tempo back to a slow and bare song is accepted by the audience. Another sign that Blaudzun has real fans, accepting what is happening on stage and people that are silent when called for. O.k., I think I saw two people nodding of as well, higher up at the first floor railing. One's glass of beer even had to be saved, which woke the guy up.

A little Chris Isaak was thown in, that got people singing with 'Wicked game'. But I also sang along to songs that were not familiar to me, probably from one of the first two albums. One of those songs, "I didn't really know how to play then" circa 2007, when 86 people came to Paradiso to watch Blaudzun. That hadn't changed,. It was the only song of which I thought, mwah. I wouldn't have minded not hearing it, failry boring. But, who knows? Didn't it take the Stones years to change 'Start me up' from a reggae song in to a ferocious rocker? There may still be hope for that one. 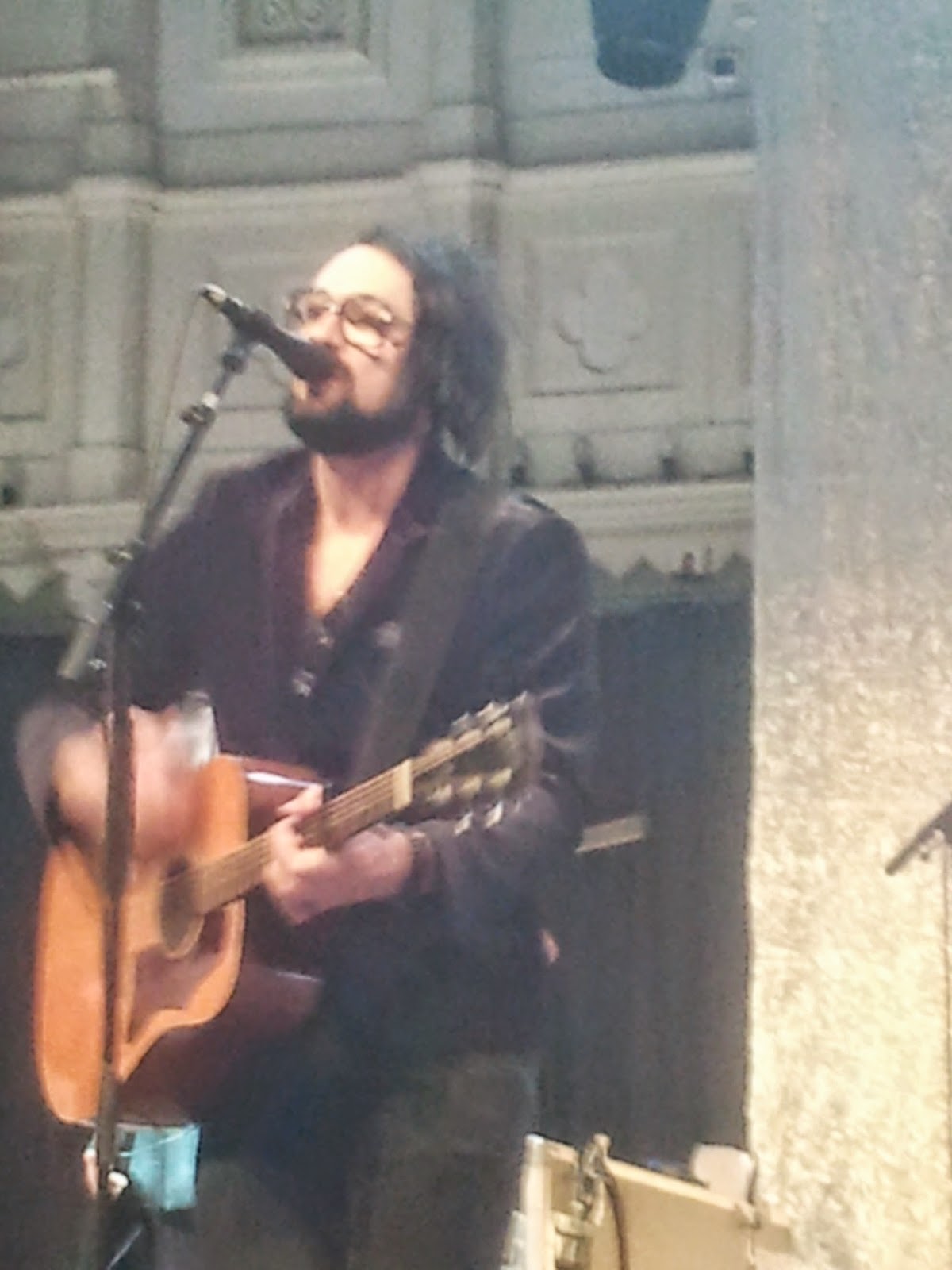 Blaudzun is good. It's that simple. The band impresses with its ability to play very different songs with a lot of dynamics. In one of the encores 'Heavy flowers' finally came by and received a monumental applause as well as played in a monumental version. A highlight of the evening. At heart there's this few violin notes that carry the song and still they are all it takes to go straight to the heart.

But what's the story on going electronic? Seems like to me a totally unnecessary sidestep, says the reactionary in me. Blaudzun is at that stage in his career, that it may just set a final step internationally as well. All else may just get in the way of that. Although touring with 8 persons plus personnel is probably impossible to afford if there are no large venues to play abroad. A huge dilemma.

All photos by Wo.