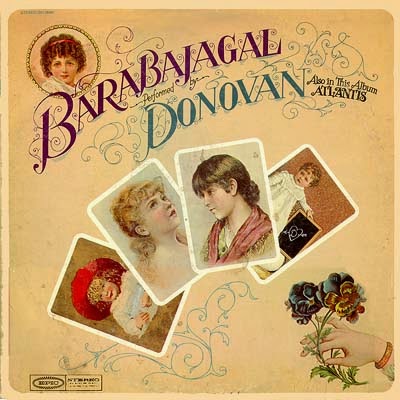 Wo. continues his exploration of the albums behind the hits of his early youth. One of these number one hits in the spring of 1969 was Scottish singer/songwriter Donovan Leitch's only number 1 hit in The Netherlands: 'Atlantis'. Although 'Hurdy gurdy man' was a hit in the late summer and fall of 1968, it is this song by Donovan that defines the singer in Wo's opinion. Another pop symphony, mysterious and overwhelming. Hence the choice for the underlying album. Preceding Donovan were albums by e.g. Joe Cocker, Barry Ryan, Blood, Sweat & Tears, etc.

Barabajagal is also the title of a single by Donovan & the Jeff Beck Group, released later in 1969. I faintly remember a sort of funky song, that I definitely did not really get at the age of 9. (And still don't, so my ears did not deceive me then.) It also did not become a large hit and disappeared from memory fairly some after, although I could always remember the central form of the song, chorus is too much honour,as it's more like a chant than chorus.

'Barabajagal' was also the last hit by Donovan in NL, with one exception in 1974. Having been in the charts continuously since 1965 and with finally a number 1 in 1969, something must have happened. Reading up on the album, I found out that Donovan stopped the cooperation with his producer Mickey Most soon after the recording sessions for Barabajagal. Or was it the other way around? Most objected to Donovan's work ethics. An important question here is, who was responsible most for the charting successes, the artist or the producer? Interesting, isn't it?

Having never heard a Donovan album before, just the hitsingles and I have a compilation from the late 80s or early 90s with some live tacks as well. So there are some surprises on this album or better, it's the diversity of Barabajagal that surprised me. All aspects of Donovan come by with the Jeff Beck collaboration as extra. There are some electric bluesrock songs and the typical Donovan folk with which he broke through in 1965, following Bob Dylan's cues. Switching from acoustic to electric, where Donovan certainly was also interested in flower power and psychedelia. Most of these sides come back on this album.

Where this diversity is concerned is also where I run into difficulty with Donovan. The plain silliness of 'I love my shirt' is plain supercilious. Man, do I hate this stupidity in sound. The soft, acoustic Donovan also is not my favourite, but certainly is alright to listen to. The mix of Barabajagal saves me from Donovan and Donovan from me switching him off.

The start of the album is mixed. After the title song, the 'Sunshine Superman' like rocker 'Superlungs my Supergirl', the song was originally recorded for that album, but shelved, rocks loud, while at the same time has an arrangement that takes it away from rock. Set off against the loud distorted guitar, a strange mix comes together making 'Superlungs my Supergirl' one of the favorites of this album. 'Where is she' starts as if Frank Sinatra is about to sing. "Breathy singing" this style is called. Let me stop my comments here. 'Happiness runs' is something of a children's song. Graham Nash can be heard as can Michael McCartney and Madeleine Bell in the rounds that go around and around. 'Happiness' works by the way, one of those songs that make this album successfully diverse.

A song like 'The love song', the title as dangerous as 'I love my shirt', has urgency. The piano gives the song urgency as do the high end vocals. 'The love song' has something modern, despite being recorded closing up on a half century ago. 'To Susan on the West Coast waiting' is Donovan's take on a protest song. Personalised as he's good at. Looked at from the perspective of a personal relationship between boy and girl. The only hint at protest is in one sentence: "Our fathers have painfully lost their way, that is ... why I'm here today". For the rest it is Donovan's small and lovely sound. For the rest Andy could have been at college on the East Coast or holiday, wondering if Susan really loves him. Not that I really like the song, but it is done quite well. Fitting in with many a song from the era and still so different.

And finally I get to the song that this is all about: 'Atlantis'. This song is build up brilliantly. The lyrics is on the legend of Atlantis, the fabled island/continent that disappeared into the ocean. Sing-song introduces the theme with an acoustic guitar  and sparse piano notes, before the song takes this immense twist into an epic chorus/chant. The lyrics switches to the personal, the singer looking for a love that may be under the ocean, that's where he wants to be. How many hits have the word "antediluvian" in them? A chorus that stops precisely at that moment that I preferably could get lost in it forever. That sort of chorus. The piano does what Abba would become great at in the 70s. A blues guitar rocks out. Donovan comes up with more different snippets of text and counter vocal melodies in different parts of the mix. No doubt, this is his best song, outshining everything else he has done.

'Trudi' is the second song with the Jeff Beck Group that Donvan and Most made for this album. To drop a few names. Rod Stewart was in the Group, Ronnie Wood, Nicky Hopkins, to name a few. In other words, Donovan was working with a few guys who were to make it really big very soon. 'Trudi', is the other odd one out on Barabajagal. Backed by Jeff Beck and group Donovan's songs were really different in sound from what he usually recorded.

'Pamela Joe' ends the original album. A bit of a ditty, this song is, but a nice one. A bit vaudeville, a bit of a joke. you can hear that in parts of Donovan's singing.

In short Barabajagal is an album that I listened to with mixed emotions. Perhaps to diverse and with the Jeff Beck Group sessions sticking out like a sore thumb. Not bad, far from, but not fitting the artist Donovan was at the time. A few song give me itches in the strangest places and some I truly like and then there's 'Atlantis'. I will never stop liking this song.

You can listen to 'Atlantis' here: