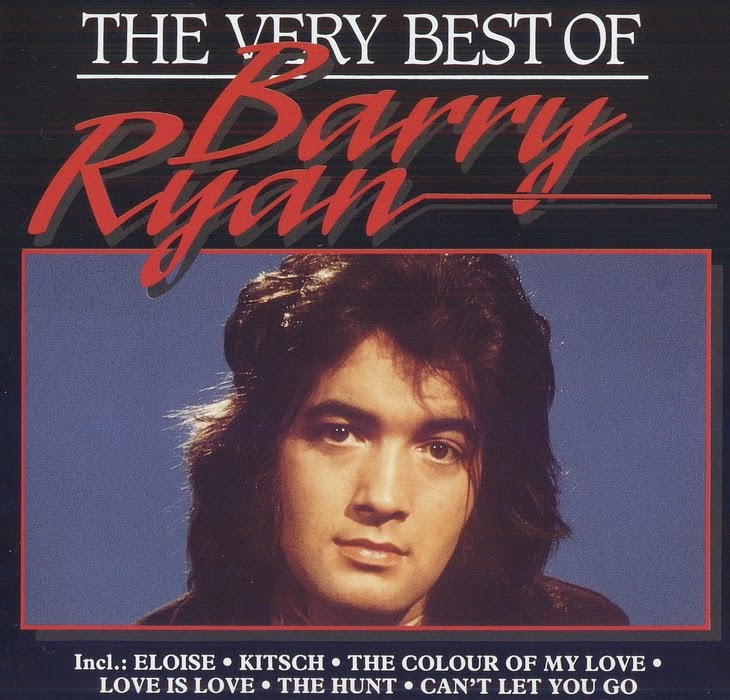 Over much of 2014 I've looked at different albums from 1968-1969. Today it's time to look at Barry Ryan, as beyond his three single hits, I've never heard a single song by Barry Ryan. The only record I could find was a compilation, so that is cheating a bit on the concept of this series, but here we go.

The very best of Barry Ryan? The very best? I honestly think that that is just one song. The song that entered on the number 3 spot in the top 40 somewhere in late 1968 and climbed to the number 1 spot the week after. The song that is a mini (rock) opera, a song that I still think is so astonishingly good. A song I danced to with my baby sitting on my shoulders of which there is a picture that he is pointing to where the music is coming from in 1994. A song which is a part of  me and always will be A song that each single time I hear is nothing but a joy: 'Eloise'.

Barry Ryan was just 20 when the song entered the Dutch charts. A kid from around Leeds in the U.K., born as Barry Sapherston. Ryan was his mother's maiden name. His twin brother Paul wrote and produced the record. So here we have two 20 year olds who were allowed to make such a grand record. Their second single in this set up, after they split up their duo and continued as a producer/singer duo.

Having produced a record like 'Eloise' there is no need to produce anything else, ever. Barry Ryan has, for several years and unnoticed comebacks from the 90s unwards, but to no avail. Everything after led to two other hits in The Netherlands, the almost as impressive 'Love is love' and 'Kitsch', a song that never did much for me and one tip in 1971. That was it. The question is, was there nothing else or just an erratic, unpredictable audience?

The second single 'Love is love' was a song that I loved just as much at the time. The 'Eloise' trick is done all over again. The large orchestrated grandeur, the wall of sound and the dynamics. 10cc made a career out of some of the sounds in 'Love is love'. Just compare some passages to 'I'm not in love. A case of one on one, I'd say. After 'Love is love' there is nothing to go on for me.

Listening to The very best of Barry Ryan it becomes clear fast that Barry Ryan also sung more normal songs. 'Loneliest night of the year' has The Beach Boys, The Beatles and Rubettes in it. The parade of instruments is still fairly large, but nothing like whole classical orchestras. This seems to go for most songs on The very best of.

At first listen my impression is that Barry Ryan's voice is too large for the small songs he's singing. Too much volume but not the Tom Jones kind of volume and reach. Some songs go in that direction or in something like 'Can I get there by candlelight', David McWilliams' one hit over here. For that sort of song Barry Ryan's voice is not sensitive enough.

First impressions also tells me that indeed nothing holds up to 'Eloise' and to a lesser extant 'Love is love', but then how many songs do? How many songs compare to the bombast of 'Eloise'. Hardly any, as this is the epitome of classical rock, in the literal sense.

'Alimony honey blues' is a pleasant surprise. Although it is a song that sounds familiar directly, it works for Barry Ryan. 'The hunt' (1969) is a song that incorporates several influences, but also gives away another secret. If you listen to some of the choruses there's no denying that the Ryan brothers have influenced Queen as well. With 'Can't let you go' (1971) Barry Ryan also is ahead of his days, as this is a rocking sound that comes back regularly in the years after. The kind of song that is still very much worth listening to over 40 years down the line. As such I'm surprised in a pleasant way. Not in the least by his voice, that he can use it in a different way and in a different genre as well.

Could I have done without getting to know more songs by Barry Ryan? Yes, of course, but the question isn't fair. It's an addition to my musical reference. It helps me place this singer better. Having said that, no matter what I will always go back to the same song, like I'm going back to it for 46 years in a few months time. 46 Years and the song hasn't lost anything of its magic and attraction. That is what spells hit, dear reader.

As I think everyone will know 'Eloise' the song I'm putting under to listen to is 'Love is love'. See if you spot the 10cc reference also....