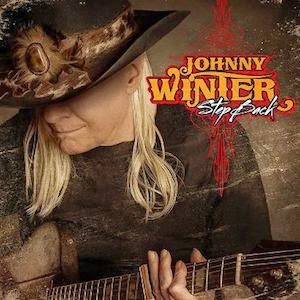 Vaguely I remember reading recently that Johnny Winter had died. On the road in a hotel room somewhere in Europe. Not much later his probably last album was released. To honour this master blues guitarist I decided to take a serious listen and write a review on Step back.

Johnny Winter debuted, unbeknown to me in 1968, worked with Muddy Waters in the second half of the 70s, which I found out about in the 80s. Made some acoustic blues albums for Alligator Records in the 90s. And then what? Probably the man kept doing what he was good at, playing and recording the blues.

For me Johnny Winter came into my life circa 1974 with a blistering version of 'Johnny B. Goode'. Unfortunately a friend let me hear Jimi Hendrix' version soon after, which pushed back Winter's in my memory totally. He was a name, not really a musician, to me. Excepting his stunning slide guitar infused version of Bob Dylan's 'Highway 61 revisited' on "Bobfest". I don't have any of his records, except the ones with Muddy Waters. Perhaps once one of the Alligator albums on tape. Enough about me and Johnny, how about Step back?

Well, if you're into blues this is a very pleasant album. Johnny Winter's voice always sounded like his vocal chords were overhauled with a rasping device. There is some slightly more strain on his voice and perhaps a little less air in the longs, but not overly much. Except in the steel guitar, acoustic version of Son House's 'Death letter', where he does a Keith Richards. Sounding drunk, and waisted in many a way. Malcolm Holcombe is another fitting comparison. Spitting, rattling and gurgling, using every hollow in his skull to produce a sound resembling a voice.

Johnny Winter mastered most blues types and showcases this on his last album. From authentic sounding delta blues to Texas style or a more soulful style of blues, all comes by. There's nothing original on Stepping back, but how can there be? Everything in blues has been said and done. Thus it comes down to being able to play extremely well, have a great band/musicians around you and being able to shuffle, boogie and rock. Stepping back offers all that, making it a fine blues album. All songs are fine covers, some known from various artist, as The Beatles, Joe Cocker or older blues artists and writers like Willie Dixon and Son House. 'Unchain my heart' and 'Long tall Sally'. Winter plays the songs of his youth once again and does so more than aptly. He's mastered them and Wintered them.

There simply is not a whole lot more to say. Johnny Winter was a fine guitarist and a fiery singer. The things he did with a slide a long time ago, may have been trend setting. That part is hard for me to truly judge. For me it was, hearing what he did in hindsight. This album is all but trend setting, but a fine example of his playing.

Johnny Winter died on 16 July 2014 at the age of 70 in a hotel room outside of Zurich, Switzerland two days after his last concert in France. Not in the harnass, but close enough to it. A fine guitarist has left this world. The tribute given here is well deserved.

You can listen to 'Can't hold out (talking on the phone)' here: