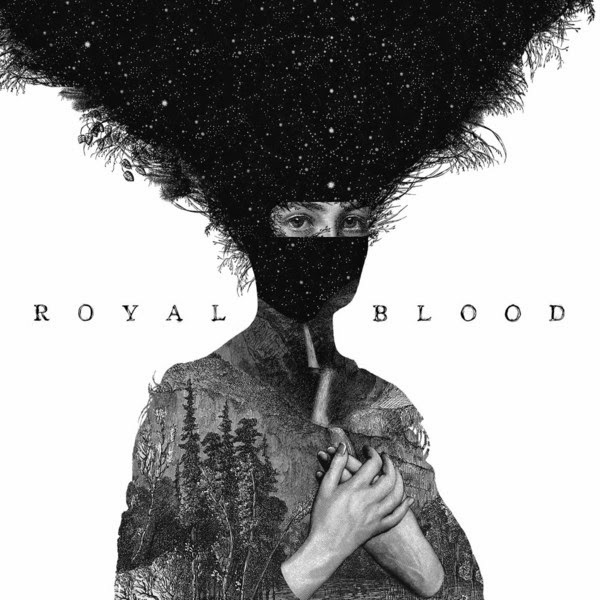 The easy way out here is that I have heard this all before. Royal Blood does a The White Stripes and even more a Blood Red Shoes and sometimes adds a pop element like The Black Keys. It does so in an extremely rocking way. It swings, crackles, slithers and is dirty as you know what. This is all you need to know, basically. So why write more?

You can listen to 'Figure it out' here.

It sure reads convincing, but let me opt to not take the easy way out. First of all, because the question can be asked in all honesty: "Who needs a six string guitar", if you have bass player Mike Kerr in your band? In fact, who needs anything else beside than a loud thumping drummer, Ben Thatcher? Together they cook up a storm. Royal Blood, est. 2013, is a band who's fame sped ahead of its record release. Playing larger festivals with only a single, perhaps two to its name. The question always remains, is the hype faster than the record? In the case of Royal Blood it isn't. This album delivers on all fronts.

The downside is that there is not a single note that can be called original. Who cares when the songs are one surge of adrenaline and excitement. Royal Blood pounds itself into your brain, with memorable songs and some violent playing. Whatever may be going on, underneath there's always a song and that's important in my universe. Like the two acts mentioned above as reference, Royal Blood has a song at the basis of its private hurricane.

What is totally amazing, is that Mike Kerr plays bass and not guitar. I would not have believed it if it was not written everywhere. O.k., I thought, so you can do this with a bass? A matter of the right stomp boxes and audacious playing, sure. But that is only half the story. Even Jack Bruce couldn't have contemplated playing bass like this in his wildest dreams in 1966 when he started Cream. There was no comparison in those days. Who played bass in rock like Bruce did in those days? Kerr is helped by a few examples, as it seems that he isn't the first, although I'm not familiar with the examples often mentioned in Royal Blood reviews.

What I notice also is that Royal Blood has a direct lineage with Queens of the Stone Age. The desert stomp of QOTSA regularly surfaces on Royal Blood. 'Figure it out' is the perfect marriage between QOTSA and Jack White. Do I love this song! A great groove and a great chorus. A rare combination indeed. So Royal Blood is a U.K. band with a lot of U.S. influences with a deep dip into the Brighton sea. A mix that totally agrees with me. One influence worth mentioning remains, Band of Skulls, mostly on its debut album though.

Royal Blood even makes an impression on me when it takes the gas off. 'Blood hands' is a ballad Royal Blood style. Of course there's more noise than civilised ears can take, but an alternative rock ballad 'Blood hands' is non the same. The band easily gets away with it. The melody is alright and the spunk remains intact. In fact the band is still rocking out towards the end of the album with 'Careless', which is one of the top songs on Royal blood. No letting up towards the end here.

Royal blood is an album that somewhat surprised me. Another U.K. hype, another duo I thought. I stand corrected. This album is great fun and an addition to my record collection. Everybody seems to have Royal blood in him it seems, if you search backwards long enough that is. In this case there's no doubt. Rock royalty 2014? Royal Blood is the name.

You can listen to 'Out of the black' here: