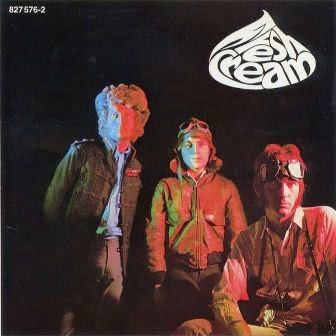 Cream passed me by in 1966-1968. When 'White room' hit the charts in the autumn of 1968 the band had already decided to break up. I can't remember hearing any of the band's other, minor, hits on the radio those days. The impact came a few years later, when a friend had 'I feel free' as a single. Other songs followed through the years. 'White room' always remained my favourite song, followed by 'Sunshine of your love' and 'I feel free'. Of the album songs 'Badge' is another.

Getting to learn the band better in the early 1980's, I found that the experimental songs and the endless live jam sessions were not for me. Only about 50% of the band's output is really of interest, in my opinion.

Cream was around for only three years, but had a large impact on everything what happened after it. It set a standard in playing in a trio setting, also on Jimi Hendrix, and on experimentation in rock. Jack Bruce was the voice, songwriter (with lyricist Pete Brown) and middle of everything going on around him. Drummer Ginger Baker and guitarist Eric Clapton went off in any direction they could while the bass kept things together, while at the same time being played like a lead instrument itself half and more of the time.

The band imploded due to the clash of characters. Eric Clapton soon became the main man he is to this day (and already was before joining Cream: Clapton = God could be read on London walls). Jack Bruce went back into semi-obscurity, being the jazz influenced musician he was. Exploring jazz rock on many albums that I all do not know to this day. So was his life a life unfulfilled when we look at his talents or has he made the most of it? I can't tell you that of course. Fact is he slowly went back to being a more obscure musician. Tucked far away in Clapton's shadow.

Circa 1980 he stepped back to the front for me for a very short while. I can't recall the right sequence correctly anymore, but it could have gone like this. The twice yearly Rock Palace nights from the Grugahalle in Essen were a phenomenon in those days. On one of these nights Jack Bruce & Friends played. A fantastic set of jazzy rock songs with just enough pop to make them extremely listenable. I bought the album and in late spring drove to the Lochem Festival with a couple of friends to watch him play there.

After that Jack Bruce went back to his place in the music pantheon: unnoticed. The DVD of the Cream reunion shows in London was his final return for me. Already "old" and in semi-good health, seated for half of the show, Jack Bruce showed once more what a fabulous bass player he was. His vocal powers had clearly dwindled by then, but still very characteristic.

This year an album was released. I listened to it once and couldn't really hear anything very exciting there. From this spot I'll promise to make amends and listen once more and more attentively. Should the album be worth reviewing, I will as a final salute to an exceptional musician.

You can listen to 'White room' here: