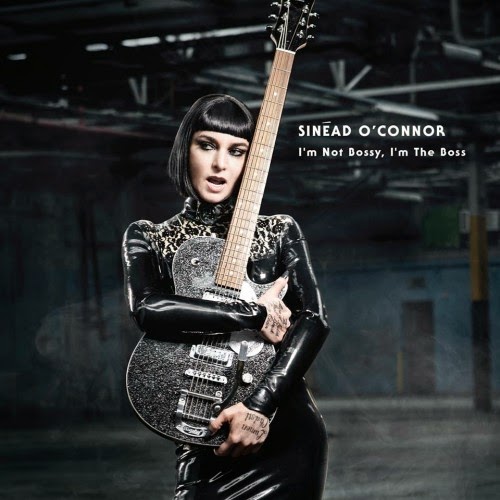 I think I know what a song title on the next album of Sinead O'Connor will be. See if you can figure that one out also. On the cover of her new album Sinead looks like Joan Jett in her The Runaways period. Don't expect any girl punk though. Looking that way and sounding that way are two very different things. The self-assured rock chick look, doesn't match the mood and lyrics of I'm not bossy, I'm the boss. Just like the self-certified boss doesn't appear so bossy either. Not all is well in the world of Sinead O'Connor. The results are the better for it as I'm not bossy... is a fine album.

Two and a half year ago Sinead O'Connor surprised me with her album 'How about I be me and you be you' (http://wonomagazine.blogspot.nl/2012/03/how-about-i-be-me-and-you-be-you-sinead.html). The first album by her I listened to since 1990. I can't remember why I decided to listen to the album, but I haven't regretted it for one second. The same goes for I'm not bossy... The mix of stout ballads and polite rockers have the exact right tone and mood to like instantly. The ultimate intenseness of 'The lion and the cobra' has disappeared and the ultimate sadness of 'Nothing compares 2U' has made room for the sort of wisdom and resignedness that comes with living.

The album starts with a straight reference to 'Nothing compares 2U' though. The keyboard sound in the background echoes the soundscapes of O'Connor's greatest hit. Comparisons stop there as a drum kicks in and makes 'How about I be me' come alive. The beauty remains though. It's a song about love, but also hurt and insecurity. Longing for something that may not be within reach right now. Sinead O'Connor sings it with the right voice, the right tone and the instruments behind her do everything right to make this song a huge success. In 1992 it would have been the right song to continue her career with. In 2014 I'm very glad to be able to enjoy it.

'Dense water deeper down' gives everyone listening to the song the opportunity to enjoy Sinead while being made love to. Is there something like aural voyeurism? Auraeurism? On the other hand it's on display, so it's not secret is it? No avoiding it except to skip the song. For that it is to good. Like the more up tempo 'Kisses like mine' is. Convincing this song is, again. O'Connor seems to have found a new muse and the right persons to write songs with, like producer John Reynolds and lead guitarist Graham Kearns. Together they create the circumstances in which O'Connor is able to do what she is good at: singing in a great way on the turnpike of indierock, pop and rock with a dash of mystical Irish folk.

The freedom these styles allow her ranges from the almost bluesrock of the fine rocking 'The voice of my doctor' all the way to the ethereal 'Streetcars'. With in between the soft starting, hard ending 'Harbour'. On I'm not bossy... Sinead is able to take different side roads, but all lead to a great song. Even better than on her two first albums and on her previous album. Slowly but surely I'm starting to realise that I'm not bossy.., may well be the best album she released to date. She even gets away with a James Brown pastiche, called 'James Brown'. Including some sax playing by Seun Kuti.

So now we have two songs from Ireland called 'Take me to church' within a few months. Both very much interesting to listen to. (There may follow a review of Hozier's album in the coming weeks. Still deciding on it.) A bit inconsistent this 'Take me to church' is lyrically though. After a couple of love songs singing "What have I been writing love songs for? I don't want to sing them any more"? Forgiven as this song and the love songs are as good as they are on this album.

Having listened more often to I'm not bossy, I'm the boss I start to realise why this album appeals to me more than any of Sinead O'Connor's previous records. The balance in music is much better, but also she herself seems to be just this little less angry, which makes it  not only easier to listen to her, but also seems to bring out her strengths so much better. Distributed in the right dosages everything comes out better. With age comes wisdom? It very much seems like it, judging this fine, fine record.

You can listen to 'Take me to church' here: