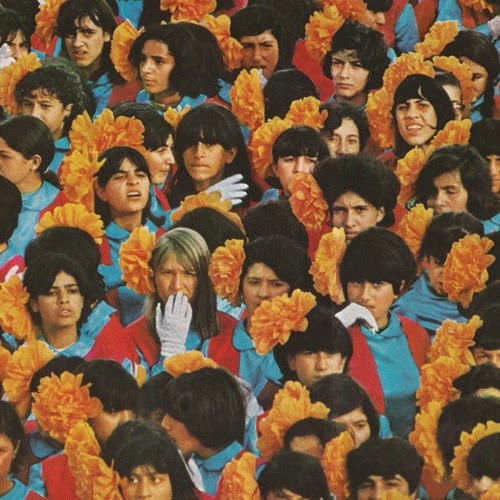 You better look closely what the name of album and band is, as you may be fooled by the font in the title and thus by the band itself. Of course the name is "Always". It just decided to write "Alvvays". The reason is said to be as simple as an online search for women's hygiene products.

Did  I write recently that I was saying goodbye to a band (always for now, mind), today I'm writing hello to a band that made a record that could have been the new album of The Pains of Being Pure at Heart, had that band drifted just a little bit back to its old sound. Alvvays made an indie pop record with several recognisable features that allow for pleasant reminiscences in new music. Without bothering the old stuff in any way.

Let me start with something negative for once. Alvvays sort of peters out with 'Red planet'. The album lacks a real point. To really stick out it needs some absolute highlights. It doesn't.

So, with that behind us we can focus on the good sides of Alvvays. Allow me to start with mentioning that Molly Rankin's voice reminds me a lot of Carol van Dijk's (Bettie Serveert) singing. That is a way to start a review. Add Peter Visser to Alvvays and one would be surprised about bites and highlights on this album. This is not Alvvays' intention. The sound is sweeter and less dangerous. Not that Visser's aggressive, far from, I think, but his playing can be. Alvvays is more into jangly indie pop.  Add a little dreamy vocals and perhaps some shoegazing while playing.

Alvvays is an album that is extremely regular in mood. The songs may be a little interchangeable even, but they sound so pleasant that this obstruction is taken away. The choice of instruments is what makes sure that there is enough variety. Not so much the slower or faster songs. For that there is 'Archie, marry me', the song that does stick out. 'Archie, marry me' allows for some U.K. jangly indie pop, with a REM reference, from some years back, with even something like a wild guitar mixed into the back. My favourite song of Alvvays at this point in time.

The mood on Alvvays is mostly dark. The singing is somewhat down cast, the sound unclear, a little muddled at times, which adds to the darker mood. The guitars sound as if recorded in a huge bathroom with the mike on one end and the amp on the other. As a whole it reminds me a little of Avi Buffalo's first album or Cloud Control's and 'The Pains of Being Pure at Heart', but also Angel Olsen. There is something naive in the songs, singing and sound of Alvvays, that a bigger budget will most likely destroy. The question remaining whether that will take away from the growth of Alvvays or not. Time may tell. On the other hand when names like James Agnello pop up on mixing duties Alvvays may be past that point in its career already.

Nine songs and it's all over. For me it is with number 8. 'Atop a cake' is this (more) clear, up tempo song that is the other gem of this album. There may remain some doubts with Alvvays, but in the mean time I'll put on this album once again and enjoy what I'm listening to.

You can listen to 'Adult diversion' here: