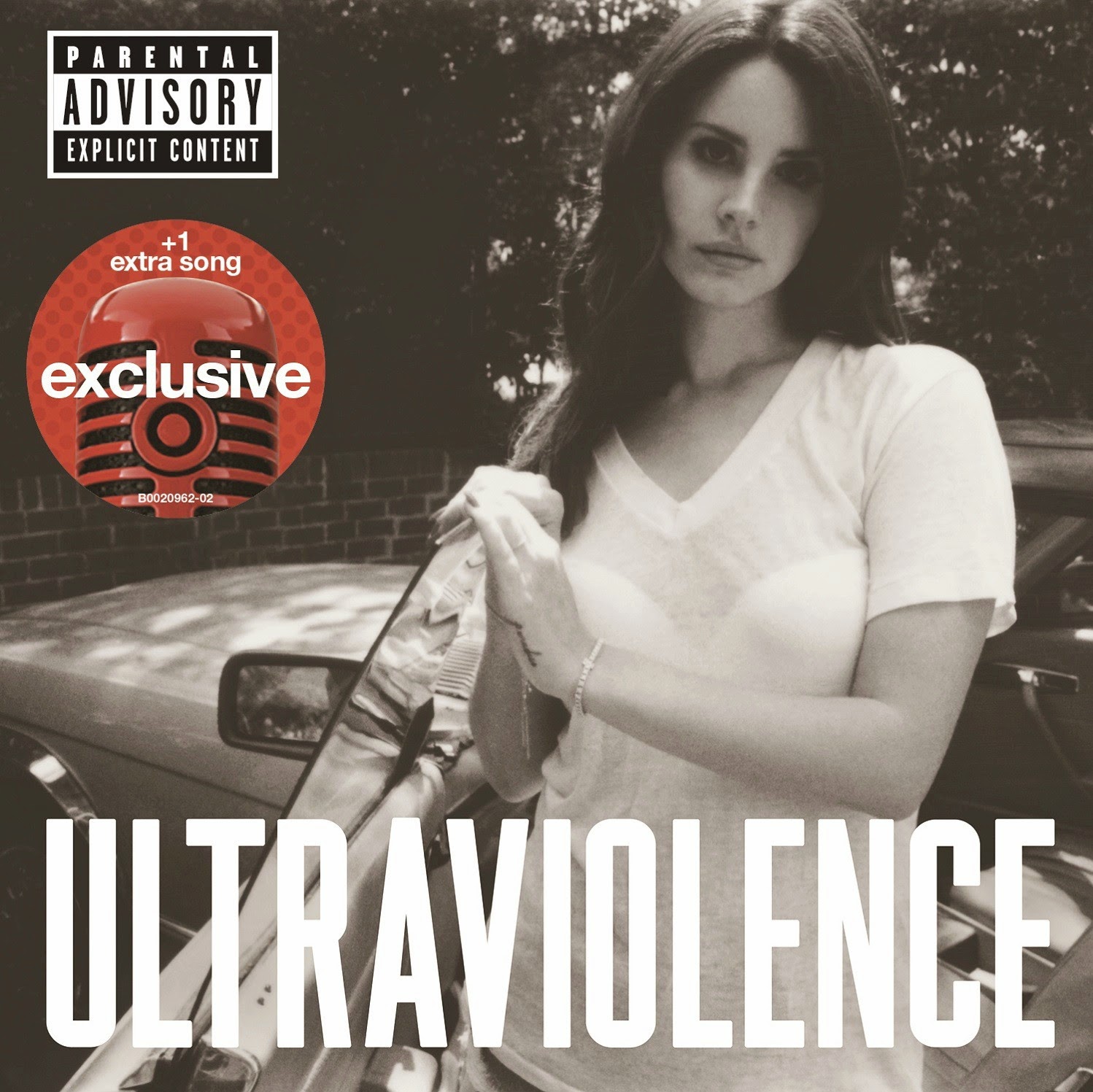 In 2012 I wrote that I was surprised by the quality of Lana del Rey's second album. It was very different from what I expected. They hype, the raving and the inevitable fall when the album finally was released. "Never follow leaders and watch for parkingmeters". Bob Dylan was right again. Although I fairly liked 'Born to die', say about 50% and was surprised again by single 'Ride' that was released with the 'Paradise edition' of 'Born to die'. Nothing prepared me for Ultraviolence though. Lana del Rey not only released a new album, she released an album full of gothic darkness, nothing one associates with the pretty countenance she is. Look and looks do not match on the cover of Ultraviolence.

One master stroke Lana del Rey played is hiring The Black Keys' front man Dan Auerbach as producer. Together they made an album of infinite beauty and darkness. If someone has proven that there can be beauty in the darkest corners it is this duo in association with the musicians they hired to execute their vision. The sound of Lana del Rey's greatest hit 'Video games' is never far away. Most songs on Ultraviolence add a level of musicality that 'Born to die' mostly lacked. The mystery of Lana del Rey drove that album. On Ultraviolence it is the mix of Lana and the music that mesmerised and totally captured me. Ultraviolence is totally addictive.

The darkness in Lana del Rey's music stems in the first place from the texture of her voice. Dark, with this rasp on it as if she's a fading femme fatale in a 1940s movie like Sunset Boulevard. A woman, who smoked too much, drank too much and led a lewd life in general and, in her middle age, is now punished for her past misdeeds, when everyone adored her. That is how the female singer sounds. Old beyond her late twenties age. "When we were young and pretty" like she ends 'Old money' with.

The 1940s comparison is not so strange. Ultraviolence also has an atmosphere that predates rock and roll. A song like 'The other woman' could have been sung by the likes of Debbie Reynolds. Even Frank Sinatra comes to mind. Not all Lana del Rey's vocal escapades work in this song, but it does show that her musical tastes span many years. Like 'Shades of cool' can apply for the soundtrack of the 'You only live twice' soundtrack of the James Band movie. It all adds to the mystery that unfolds on Ultraviolence. The guitar contributions of Auerbach and the firm drums keep the album soundly in the 10s. 'Shades of cool' is one of the songs he really lets it rip.

'Cruel world' kicks off Ultraviolence with tremendous confidence. A very thin guitar and Lana singing is all that is needed to show that this album, the album following the hype is going to be all the world expects and much more as far as I'm concerned. No pleasing here: "You're fucking crazy" it seems. On second thoughts: "You're crazy for me". Something diabolic comes through as she sings: "I'm so happy that your gone". Her voice seductive and at times childlike, as one of the many girl singers of the past. Before this sneer comes into her voice again. What a song 'Cruel world' is. Lana del Rey takes no half measures in the first song of her new album.

Not all is this dark. At best there's this melancholy for something else, something seemingly beyond reach. "Something reminding me of when we were kids". Whether that is pleasing or threatening remains to be seen, as the title of the song is 'Ultraviolence'. 'Pretty when you cry' is another song that has this ambivalence in mood and title. If forced to choose, this may be my favorite of Ultraviolence. The quality of 'Brooklyn baby', the pop feel of 'West coast', including a Latin 'radio mix' among the extras, give this album a fine boost.

Lana del Rey shows that she's here to stay. Ultraviolence is an album that competes with Kate Bush's albums, with the Nancy Sinatra of Lee Hazlewood. She has entered her own universe, the place only the greatest artists reach. In my opinion she has reached that destination. Ultraviolence is an outstanding album that just begs listening to.

You can listen to 'Ultraviolence' here: