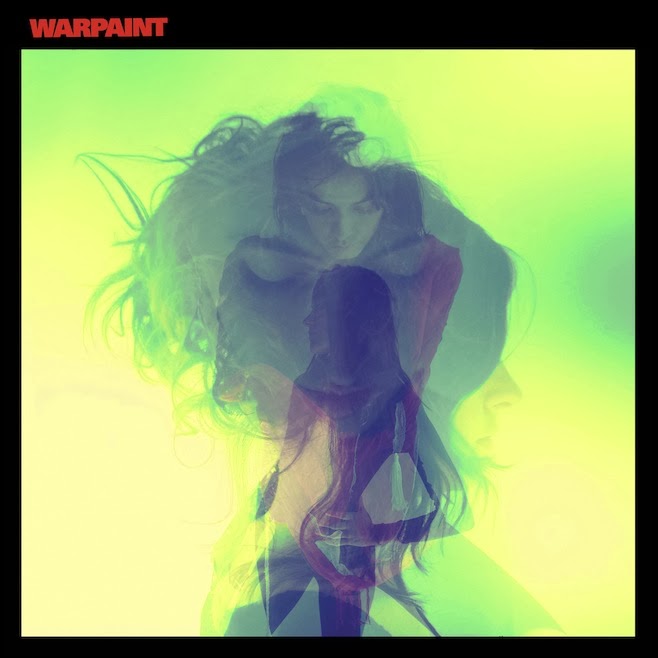 Funny, how some records are completely different from what I would expect from reading the first reviews, before having heard the music. Warpaint's second album, the eponymous Warpaint, is such an occasion. Everything spelled difficult, hard to listen to, no songs in sight. The band surprised me in a very pleasant way with this mystical album full of mysterious tracks. Kate Bush from long ago and recently came to mind first. Faint shapes moving around in the fog on the moors. The album cover is more than just symbolic here. Friends or foe, men or beast? Hearing the first songs, I could only think: wow! Looking forward to the second half of the album, but also wondering whether this fun would keep up.

Warpaint is a band from Los Angeles that formed in 2004. Emily Kokal sings and plays guitar, Theresa Wayman plays guitar and sing, Jenny Lee Lindberg plays bass and does backing vocals, finally Stella Mozgawa plays the drums. An all lady band. Warpaint is the second full length album after the EP 'Exquisite corpse' (2008) and 'The fool' (2010). Not an extremely high output and one that did not tickle my fancy up to a few weeks ago. All this changed with Warpaint, an album that combines a few elements that I certainly like. Just by listening to the real opening track 'Keep it healthy', I had the suspicion that it be worth my while to listen closely to Warpaint. The Radiohead like guitar playing, without going over the edge as Oxford's finest sometimes does in the rhythms, 'Keep it healthy' sounds very interesting and plain good. This level is continued with 'Love is to die'. The dancy rhythm reminds me of U2, as do the guitars that have a very spaced sound. The double tracked dreamy vocal does the rest. There is a certain aloofness in the voice, that contrasts deeply with the intensity of the message: "Love is to die, love is to not die". Giving the track that extra edge like cooled fire; if such a thing existed.

The influence of Radiohead becomes even more clear in the next song, 'Hi'. It is not difficult to hear Tom Yorke's lisp in this song. 'Hi' gets some variations/eruptions from the desolate, empty rhythm, in all the right places. Sometimes in the form of instruments added, at another point by a backing vocal. Warpaint develops into an album that is ambient. Songs set moods, with a lot of synthesizers and drum computers instead of more traditional instruments. Acoustic guitars can pop up as well. It is here that the influence Kate Bush manifests herself. The Kate Bush of her last five albums, where Warpaint has a slightly more pop feel to the songs. The songs are easier to relate to e.g. than the songs on 'The dreamer' or '50 words for snow'. 'Teese' is a song that definitely comes close to what Kate Bush has presented to her audience over the past three decades.

Another facet to Warpaint is the beats. They may be subdued or clearly present ('Disco/Very'), the influence from dance or hiphop is here. Reading up on Warpaint, that was co-produced and mixed by Flood and mixed (partly) by Nigel Godrich, it is more surprising how Warpaint sounds, as most songs were conceptualised while jamming and playing together during soundchecks. From there these ideas must have been taken in many directions while in the studio. It is also apparent that the discription of the band and the instruments the respective members play needs adjustment. Guitars? Bass? Who does all the other things? And the moniker indie rock band may not suffice as description any more. Warpaint has set some steps in its development. Steps that have made it a very interesting to follow band. There is some influence from new wave, early 80s doom and a faint hint at psychedelia as well. Let me give one more example why Warpaint is so interesting. 'Feeling right' has these dark, brooding synth sounds lurking in the background of the song, with angelic singing over it. The guitars that sound like being played in a large bathroom. Warpaint created all the right sounds to make this song totally work. Slow paced, yet exiting, reaching deeper levels of emotions.

It is hard to really predict where this album will go with me over time, but for now I'd say that Warpaint certainly is the most interesting album I heard that was released in 2014 so far and the one I've played the most. Time will tell if our relationship is going to deepen, but odds are that it may well be so.

You can listen to 'Love is to die' here.