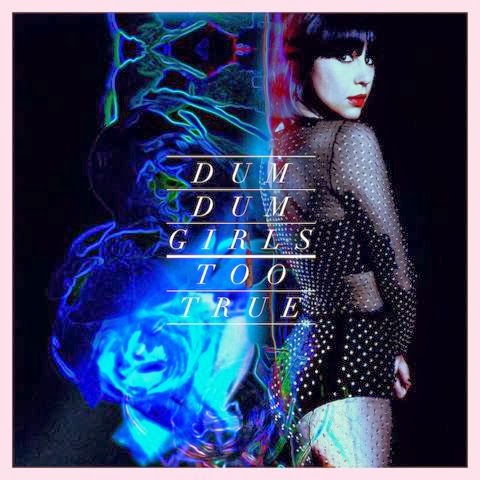 Another new name for me: Dum Dum Girls. A group of ladies producing freshly sparkling pop punk rock songs that go back a long way and still sound totally fresh and 2014? You'd think so according to the band name. Too true is a bitter-sweet album that is bitter-sweet, full with jangly guitars, strong rhythms and singing, giving the nod to the more melancholy and the darker sides of life, without sounding desperate.

The sound on Too true is not unlike what I heard on 'Fade away' by Best Coast, the EP that I recently reviewed, around the same time I heard Too true for the first time. A lot that I wrote on Fade away, goes for Too true as well. There are dips into the Phil Spector girl vocal group sound of the early sixties. The Bangles and the Go-Go's are there. In 'Are you okay?', when the tempo goes down, it could be Susannah Hoffs and co singing and playing on a comeback record. Dum Dum Girls fit into the new girl pop punk rock music coming out of LA. Too true is much more polished, aimed at a larger audience than e.g. Bleached.

Dum Dum Girls' present sound is only a small shift from the sound I heard on 'Only in dreams', released in 2011. There is a fiery pop element in Dum Dum Girls' music. Aimed at pleasing, but not without some danger. There are some barbed wire fences to step around and under, some hidden holes and low passages. Every one who takes care finds the treasures hidden under the rougher film laid over the music. Pure gold here and there, with some diamonds on the side.

Another reference on Too true is what I call the dreamy side of The Stone Roses. Think 'This is the one'. Front lady Dee Dee has that quality in her voice too and sings a lot better than Ian Brown. The same goes for Blondie. To me it's not a surprise, hearing Dum Dum Girls' sound, that the band works with Richard Gottehrer as producer (together with The Raveonettes' Sune Rose Wagner). He always has worked on the edge of pop and things that "older" people did not prefer to hear, but found themselves to be doing anyway. Striving to find and finding the route to a perfect pop song. There are several on Too true for those who listen.

Dee Dee has a voice that is totally convincing in the music of Dum Dum Girls. She carriers all songs off easily, singing in a way that somehow reminds me of the witch in Hansl and Gretl. Sugar all over, but dangerous on the inside. The bitter-sweet just drips from her voice. The danger also hides in the contrast of her sweet sounding voice with the harsher parts in the sound of Too true. Like the sweet pop punk sound of a song that ends with the only one thing left: the low, completely distorted growl of a guitar that had been lurking in the background the whole time. As if it caught the whole song with one large bite and swallowed it whole. The mood change on Too true which is 'Lost boys and girls club', where Dee Dee's voice goes down, makes the song totally stand out and made it one of my favourites. The combination of distorted guitars, the lead riff and the slow, almost harsh rhythm, makes 'Lost boys and girls club' an instant classic. (And there is a hint deep down to Marc Almond and Soft Cell. Not only in the video. Depeche Mode as well.)

Looking closer, Dum Dum Girls is really a Dum Dum Girl: Dee Dee. She plays guitar and bass on Too true. Sune Rose Wagner plays all other instruments on Too true. Together with Gottehrer they have created an album that ranges in influence from Norwegian synthpop band Aha, to Madchester's finest The Stone Roses, 80s synth bands, the late seventies pop punk icons like Blondie, right up to the days that Gottehrer played in a band himself: The Strangeloves. Within the songs there are nods to a desert twang guitar, punk and surf guitars, The Ronettes, etc. Together it all makes Too true, a great album by Dum Dum Girls. Was Fade Away on top only last week, its position is seriously challenged by Too true. Another great release in 2014.