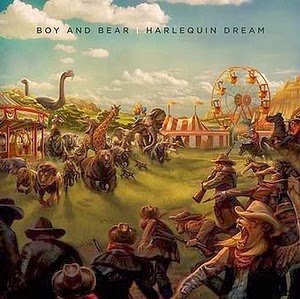 Boy & Bear? Quite a childish name for a band. Even if there is an idea behind the name. That however is not a reason not to listen to the music produced by Boy & Bear and I'm the wiser because of it. Harlequin dream takes us into Midlake country, without copying the Denton, Texas band. Boy & Bear is a little more exquisite, as the music flows just this bit more freely. 'Baker street' era Gerry Rafferty is not far away either. It just goes to show that Boy & Bear made an impression on me without having to make too much of an effort.

Boy & Bear is a band from Sydney, Australia and was formed in 2009 when singer-songwriter Dave Hosking was joined by Killian Gavin. The band expanded with Tim and Jon Hart and Dave Symes joining and released its debut album, 'Moonfire', in 2011, to critical and commercial success. Second album Harlequin dream even made the #1 spot in Australia. All this went by me, living at the other end of the world. Harlequin dream was spotted on my radar last month and drew me in quickly. It happened quite easily: album opener 'Southern sun' opens somewhat hesitatingly. Then it stops altogether. After a short silence an acoustic guitar starts strumming, drums and  one note on an electric piano fall in, after which this simple sounding riff on an electric guitar is played twice. That was the moment Boy & Bear had me. The heavenly singing in the chorus finished it off. I was hooked on Harlequin dream from that moment on and was not disappointed.

Boy & Bear is described as indie folk band and has toured with the likes of Mumford & Sons. Personally I do not hear a lot of that on Harlequin dream. Well, in the first part of the album. Overall I'd say that the band is more at home in a seventies environment. From Crosby & Nash to The Eagles. Soft pop with close harmonies and mostly acoustic with some soft rock overtones, with a few song nearing the top with violins and all. And Midlake. These long sounding keyboards, filling the whole aural space, under which there is a sound rhythm and over which accents and singing is mixed. Yes, there is an odd banjo and a song like 'A moment 's grace' is a bare form of M&S. 'End of the line' is a combination of M&S and Bernie Leadon era The Eagles.

What I like a lot on Harlequin dream is the subtlety of most songs. The sound is full with many instruments striving for prominence. Guitars and drums obviously, but by listening a little bit better a lot more reveals itself enriching the sound of Boy & Bear. That could be an organ, a banjo, concert bells and copper, all within the same song, without a cluttered sound. Loud passages, soft passages all have their moments. Even within the same song. 'Back down the black' is the best example for this. A longish song, over 6 minutes, with longing mood. A lot going on in there.

Let me give one more example of how Boy & Bear does its thing. 'Stranger' start off with a few simple sounding notes of strummed chords. Slowly the songs evolves with a sixties sounding organ and a louder guitar eruption. Final song 'Arrow flight' tops it all off. A slightly psychedelic sounding keyboard gives the song a very distinct flavour, setting it off against all that went before on Harlequin dream. The acoustic guitar against the electric piano at opposites in the soundscape work very well. 'Arrow flight' is the capstone of Harlequin dream. What a lovely and great song!

Over the whole of Harlequin dream a bite is missing. I would have preferred a few songs with an edge to them. This lacking is compensated by the quality of the songs, the voice of Dave Hosking that has a nice edge to it and the way the songs are fleshed out. Boy & Bear compete with 'Antiphon', which I recently named Midlake's best album to date. Harlequin dream comes very close to the quality of 'Antiphon'. And who knows what happens when I listen to it more often?

Boy & Bear is another band that caught my attention recently that I had never heard of. An addition to my collection of bands. Let's see whether our relationship is going to deepen over time. Boy & Bear can be sure that I will check out 'Moonfire' soon.

The final comment has to be on the weirder than weird cover. Just look at it yourself and let yourself be amazed. Very far out, I think.