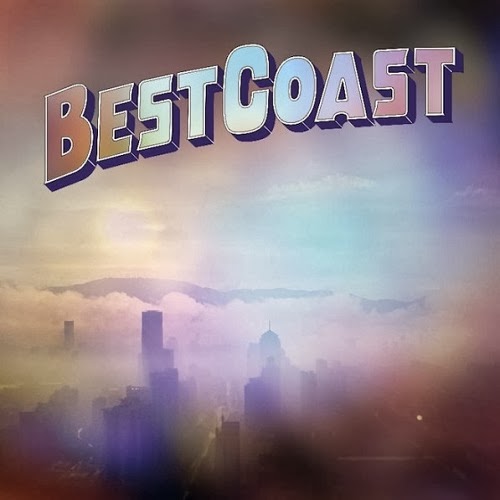 For some reason or other the songs of Best Coast on its first two albums didn't do much for me. 'Crazy for you' (2010) and 'The only place' (2012) went in one and out the other ear. The more surprising that the new, seven song, EP of Best Coast gripped me and did not let go afterwards. So, do I need to go back to the two previous albums? This may be necessary. Fade away is a punk pop album not unlike several others that were released in the past eight months, but effortlessly aiming for the top position. Bleached, Deap Vally, Big Deal? It looks like they have met their match here.

Best Coast is a duo. Betheny Cosentino is the front woman, playing guitar and singing. Bobb Bruno is her partner in crime, playing guitar also. The duo formed in 2009 in Los Angeles. The sun is never far away on Fade away; in the music. Whatever is fading away, it is not Best Coast, as the music on Fade away is potent. A mix of The Shangri-Las emotions and mood, punkpop in the sturdiness of the music, pure pop in the melodies and the singing of Bethany Cosentino. Nothing but a winning combination.

Musically the EP covers a lot, starting with anything with loud(er) guitars. A nod to California all girl bands The Go-Go's and The Bangles is evident. Fade away is also bedded deeply in music that is coming out of Los Angeles in 2013. A new hot spot in music? Just listen to how songs like 'I wanna know' and 'This lonely morning' play out and you'll know what I mean.

Next to that, the sixties feel to Fade away is so apparent in the way the melodies are presented. It's 'Leader of the pack' all over. An impending sense of doom hangs over the vocals. A mean boyfriend, who should fade away, here, an open heart but a lack of trust there. It is in 'Baby, I'm crying' where the mood on Fade away changes. It becomes even more melancholy, the tempo is down and acoustic guitars and faint country tones find their way into the music of Best Coast. Beautiful notes are played on an old fashioned sounding guitar descending towards the chord change. Fade away opens up. A beautiful butterfly emerges from the hard working caterpillar. Listening closer to the EP again as a whole, I noticed that the mood shifts gradually over the album. The placing of the songs is well thought out. Clearly this concept adds to the quality and impact of Fade away.

The next surprise is 'I don't know how'. The clock is set back something like 44 years. 'To know him is to love him', 'Baby, I love you', 'Like I do', all references that come to mind. Songs released a long time ago in a completely different time and age. The tempo may go up in he second half of 'I don't know how', the late fifties, early sixties flavour is stamped all over this song. It is lyrically that the optimistic times of 1960 is not matched. 'I don't know how' is one large cry of uncertainty and doubt. Lyrically "I don't know how" may be repeated a few times to often, the musical impact is just great. A great finale to Fade away.

Taking Fade away all in, it can either mean two things: Fade away is a nice diversion to the regular output or Best Coast jumped on the punkpop bandwagon coming out of Los Angeles in 2013 and, as far as I'm concerned, caught the lead position straight away. Fade away is a gem of a record, with the right layers and depth to make it a fairly unique record, sets it apart. As far as I'm concerned a giant leap from where the band was before (and I promise to listen once more should I've missed something).

You can listen to 'This lonely morning here' here.
Gepost door Wo. op 09:22