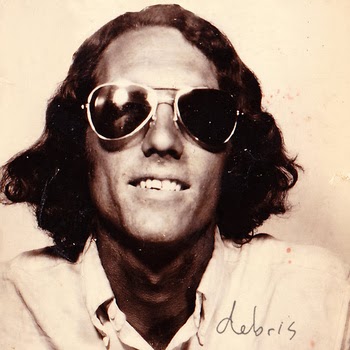 Recently I reviewed Roman Candle's previous album Oh tall tree in the ear (click here), an album that I found on the Noisetrade.com website. Doing a little research into the band I found that there was a more recent album, released in October 2013. I left you with a promise to take a serious listen to Debris and here is the result: a new review.

In the four years that separate Oh tall tree in the ear and Debris a lot must have happened to Roman Candle. From the roots rock on Oh tall tree in the ear the band shifted to another sound, a mixture between synthpop and guitar oriented pop. It is certainly an interesting question to learn about the reason for this switch. The change is so drastic that I stopped listening during my first encounter with Debris. This is not my kind of music! As defeat is not always an option, I went back to the album and started noticing a few things.

The main stay, the anchor of Roman Candle is the voice of Skip Matheny. Matheny's voice suits this music as well. It remains a utterly pleasant voice. From there the step to the music was easier to make. The intricate guitar interplay on 'Small time' opened up my ears. The way the 'oohs' go around in the background. "It ain't no big deal. It's a matter of small time", is a lyric that says a lot on most relationships. Being able to put things in perspective and address the underlying problem saves most relationships, if people are able to do that in time and make the "small time" for each other. That's just what this album needed from me.

Soundwise Debris is a lot less organic than Oh tall tree in the ear. Drum beats are present, all sorts of electronic blurbs pass by in the background and synthsounds that go back to China Crisis' 'Working with fire and steel' and 'Wishing'. 1980s all over again. And these were the sort of bands that I have an album of, because I liked the singles, but never got passed side one. And it is these sort of songs that come by on Debris. On the other hand there is the fine guitar work in a song like 'Nowhere to start' and the vocals that slowly evolve into a punky attitude, where drums become hard hit drums. So my mood changes into another direction with Debris.

I find that it is very hard to form a real opinion about Debris. The spoken word title song? I really do not know what I should do with it. Some songs are just to synthy for me, some I think are truly beautiful. Debris just tosses me around into extremes, but not by tickling my senses, challenging me to make an effort. On the down side Debris pulls open all drawers in my mind where I file the pop and rock music I hate most: 80s synthpop, doomsynthpop, etc. And just when I've made up my mind 'Learned to forget' comes by. Again that mix of synthpop with a hint of punk vocals. A song which does tickle me in the right places.

In other words I cannot make chocolate of this album. It doesn't make sense to me. So, if you like 80s synthpop step right in, if you don't mind some good guitar work woven into the synths that is. If you like some intricate guitar playing, step right in, if you don't mind a lot of synths. However, if you do not like the combination, this may be a hard album to follow. But, never give up until you've given Debris a try. It has its moments and some are even very good. The combination works perfectly on ´The world awaits us all´. As a whole I have my doubts about where Debris and I are going though.