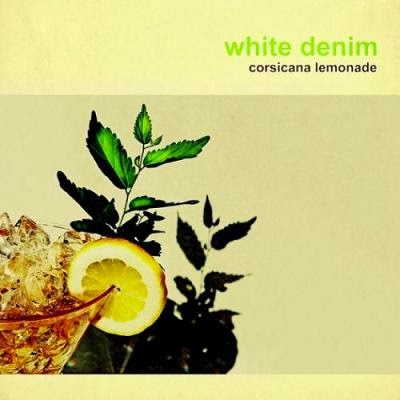 Oh yes, this is real good old time music. It even took me back to the only album of Les Dudek in my possession. But just as easily it brings me back to Flying Colors' debut album of 2012, that I reviewed in a very positive way on this blog. White Denim is a band that does not object to letting in some influences and make then sound loud and clear in its music; from symphonic rock or classic rock, some funk or blues. Double tracked, fast played solos play a role on Corsica lemonade. The sound in general is one of days gone by. I'm hearing songs in a style which I personally haven't heard since the 1970s. Climax Blues Band, Average White Band, Atlanta Rhythm Section? The few songs I know from these bands from the US with long names, come to mind straight away. Funky rock, that had its epitome on Wild Cherry's one hit 'Play that funky music'.

Is all days of future's past on Corsica lemonade? No, there are also songs here that put the album in the here and now. Next to that, as you'll have surmised, not all was well with me and the bands with the exorbitant names of the 70s. Is all well with me as far as White Denim is concerned? Having heard Corsica lemonade for several times now, it seems like I am. Corsica lemonade is a varied album, that, yes, is steeped in past sounds, very different ones even, but fits into 2014's music scene pretty well.

White Denim formed in 2006 out of the ashes of Parque Touch and is based in Austin, Texas. Starting more in punk, the band evolved more and more to jazz rock, southern rock, and symphonic rock. The band has a fierce output over the years. Corsica lemonade is its sixth album since 2008, with many EPs and singles as well. The direction the music takes seems to be made up per song, with some side stepping within a song as well. 'Come back' starts out as straight southern rock, but gets a few jazzy intermezzos along the side. Allman Brothers style? This makes Corsica lemonade a lot of fun, as I never know what is up next and all is done in good taste and played extremely well.

The solid foundation is laid by Joshua Block on drums, Steven Terebecki on bass, the overtones come from Austin Jenkins and James Petralli who both play guitar. Vocal duties are by Terebecki and Petralli. Jenkins joined in 2010. The interplay between the band is quite interesting and all band members mold themselves easily to the different styles on display. If one rule is clear, it is that there are no rules within White Denim, as I would not be surprised if opera would come by as well. (It doesn't, so maybe there is a rule or two.) A song is allowed to follow its course. Blues rock, Johnny Cash?, a song can start anywhere and develop in totally other directions. There is one constant though: the songs remain of high quality. It doesn't hinder me in any way when listen to White Denim. I just go with the flow and submerge myself in Corsica lemonade en enjoy myself tremendously. Where things go slightly wrong is when a Christopher Cross kind of song comes by, 'A place to start'. Not my cup of tea. Luckily 'A place to start' is more 'The place it ends' on Corsica lemonade. Should it be the start for the new album, then we'll cross that bridge when we get there. (That's English for "Who then lives, who then cares".)

Listening to Corsica lemonade I get more and more convinced that it doesn't make sense to try and push White Denim into a musical corner. The band just breaks free and heads off into another direction. Pursuing whatever muse it is hearing. As long as that brings me songs like 'Pretty green', rocking in a slightly lopsided way, I'm totally fine. It does beg the question who is White Denim really?, but who cares if so many songs are so pleasantly good. I may even have to get my Les Dudek record out of the stack and play for the first time since....????