Blind Willies is a band from San Francisco and not one with your average line-up. Sure, the bass and drums are pretty normal. Even a singer with an acoustic guitar is a pretty normal sight in a venue like Q-Bus Leiden, that specializes in American roots music. A trumpet and cello that were the solo instruments? Now we're talking. It made for music that was not totally average. The closest I could come in situ to compare was Counting Crows. and like Counting Crows Blind Willies were able to get me near ecstasy and boredom within two songs and back. Later Gogol Bordello came to me, but not very obviously. There was something Eastern-European in there. 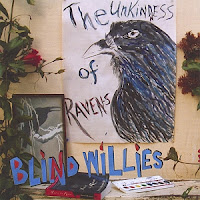 The gig started with a beautiful song. Most songs had loads of text and storylines that are impossible to follow when hearing songs for the first time live. At these moments the melody determines where a song will end concerning my mood and this went all across the board. At the moment I started to give up, Blind Willies played a German (Yiddish?) song that stuck out all the way. Another rhythm, another feel and the show came back alive. Then the guitar played two or three blues notes that send off warning bells in my head. Nothing happened for a few seconds and then the cello set in and I was singing along before I consciously knew to what. "My girl, my girl, did you lie to me?" The now Nirvana song by Leadbelly was played and what a surprise! Then a Blind Willies type rocker was played and the concert soared. It all ended with another bit bland song.

In short I do not really know what to make of Blind Willies. To really know I will need to hear them on record. Live they were different and made a difference in several ways. This makes Blind Willies stand out and isn't that what making music is about? With each song they forced a reaction in me. Add to the whole mix the two, three and four piece harmonies and an extra layer is added to this band's music

A comment singer Alexei Wajchman made is one I heard several times before, that the audience in The Netherlands is so much better than in the US. Wait till you get to play the Paradiso! That will make you change your mind. In a venue like the Q-Bus where everybody comes to enjoy and listen to the music on offer it may well be the case.

You can listen to Blind Willies' albums here.