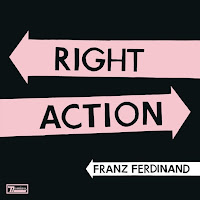 It was somewhere in 2004, sitting on a stool in Velvet, Leiden, that I requested to listen to 'Franz Ferdinand'. "Jacqueline was 17, working on a desk...." When the band kicked in after this very pleasing, slow and sensitive start of Franz Ferdinand's debut album, I was nearly swept off my stool. It was a near physical experience. 'Jacqueline' touched me somewhere so deep that I was a fan three seconds into this part of the song. It didn't matter anymore whatever would come next, I had made up my mind and bought 'Franz Ferdinand'. In 2013 we are only three albums down the line, not an extremely high score. 2005's 'You could have it some much better' consolidated the status of the band, 2009's 'Tonight' had a lot of dance influences incorporated into he music, that gave Franz Ferdinand an extra bite. So where are we in 2013?

The album was preceded by the single 'Love illumination'. The song is an instant winner in a line with 'Take me out', 'Do you want to', and 'Ulysses', Catchy, easy to sing along with, just begs dancing and has a great gimmick in the form of the organ melody. A hit, a winner, the right song to announce any new album. The chorus harmonies tend to psychedelia, the harmonies between the two guitars just add to the effect. A great riff with a hip retro distortion sound. And then I haven't started about the sixties sounding organ. It's just the finishing touch to a great song. Let's go into the album now.

The first thing I noticed listening to Right thoughts, ... is that this is not the Franz Ferdinand we know of the previous three albums. Several songs are not as easily digested as before. There are clear 60s overtones in some songs, but also disco of the Giorgio Moroder variety. 'Stand on the horizon' has this easy flowing pure pop singing melody, with a keyboard sound straight out of a Donna Summer hit or 'Call me', Blondie's Moroder hitsingle. While 'Fresh strawberries' is a The Beatles song turned Franz Ferdinand. The singing is so fluent and nice or friendly, while the guitars are FraFer in the softest form of its trademark prickliness possible. With a beautiful popsong as a result.

This twist into the further evolution of FraFer makes that Right thoughts, ... took me longer to get used to than the other two albums following the first one. Having heard the album several times by now, I confess that I still have to get used to two of the ten songs and don't know which way I'll go on them. As long as there are instant winners like 'Bullet', this must be the next single!, Right thought, .. is unbeatable. The same goes for 'Treason! animals'. The driving pulse of the song just makes me happy. The organ sound is a key part of 'Treason! Animals'. A keyboard is not new to the sound of FraFer, but it is in the way it is used and becomes a real part of Right thought,... as a whole. It has become an instrument of prominence. Sometimes even carrying a song, like the soft and mellow 'The universe expanded'.

In the last two songs of Right words, ... my concentration span goes down the drain. The reaggaeish 'Brief encounters' I just don't get. In both songs FraFer seems to have the lost pop element that makes all its songs shine and these two just don't. They make me want to go back to the start, to the title song, 'Right words'. To what went on before. All eight songs are winners and great additions to the repertoire of FraFer. Eight out of, only, ten songs, may not seem a high score, but when the songs on Right words, ... are of such a high quality as on offer here, who cares. FraFer delivered another winner. That's the only conclusion I can draw here.

Right thoughts, right words, right action comes with a bonus live cd containing some songs of this and previous albums. A present from Franz Ferdinand to its fans. Having heard it all, it makes me want to go to a show as soon as possible.