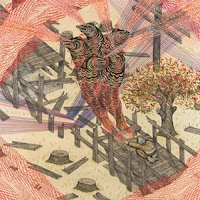 There are bands that a new record is long awaited if not longed for and bands that are sort of forgotten. Rogue Wave is one of the latter bands. Rogue Wave's second album 'Descended like vultures' made them the darlings of indie pop. As I didn't really like the album I sort of forgotten about the band from Oakland. The bigger the surprise when I learned of a new album, to my surprise the fifth album and found myself liking it.

Rogue Wave is a five piece band, although only two members are consistent. Singer/guitarst Zac Rogue and drummer Patrick Spurgeon are around from the very beginning in 2002, all other spots are a coming and going of musicians. Presently Dan lead, Masanori Christianson and Rob Easson complement Rogue Wave. Together they have made an album with a dreamy quality, with some psychedelic overtones and a way of singing that made me want to play Sparklehorse's master piece 'Vivadixiesubmarinetransmissionplot' straight away.

On S(a)tan there are all this deliciously subtle undertones going on. A fuzzed sound that sort of rolls through the background, in and out of the spectrum. A guitar that kicks in out of nowhere knocking the fairly easy going song about roughly. It's the fine details like these that make me prick up my ears while listening to Nightingale floors. This is just one example. With 'Used to it' Rogue Wave jumps on the bandwagon of folkrock and jumps off, on and off again. The drums are firm and not just a kick drum with percussion, but the melody of the chorus and the way Zac Rogue sings it could easily be Edward Sharpe or Mister and Mississippi. Not the rest of the song though as its too tough for that. There are many other influences to note. From REM and nowhere more than the 'Everybody hurts' like anthem song 'Everyone wants to be you', that ends Nightingale floors. A song that goes on and on in this slow, dragging rhythm, sucking the listener in, adding an organ and piano here or extra guitar there, until we all move into the grand finale. Impressive!

Having missed two albums entirely I can't judge whether Nightingale floors is a giant step forward. From 'Descended like vultures' (2007) it certainly is. This new album is less strictly indie and allows melodic interludes and details that make a song more interesting to discover and enjoy. The way 'College' chances its shape and mood towards the end make it a sonic trip, which is followed by an acoustic guitar that starts 'Figured it out' that reminds me of The Decemberists, for a short while. Rogue Wave takes a turn at just the right moment to make 'Figured it out' Rogue Wave.

Nightingale floors is far from a spectacular album. It isn't aimed to be one. The album is well-crafted, arranged and fleshed out. A very pleasant listening experience, with enough to discover with each turn. Why ask for more? The only thing I'm complaining about, is that every time I am to write Nightingale floors I start with "Florence".