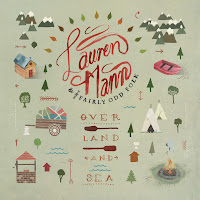 The review of Lauren Mann & the Fairly Odd Folks album 'Over land and sea' was very positive (click here). It also made us curious to the ideas and vision behind the album. Musically as well as lyrically statements are made. We reached out to Lauren Mann and here's the result in the form of an interview with a woman who seems to know where she's going.


As not everyone reading this blog may be familiar with you, how would you like to introduce yourself?
My name is Lauren and I play in a band called Lauren Mann and the Fairly Odd Folk from Calgary, AB.

Your album is given away for free on Noisetrade.com. Record companies fight their vested interest hand and tooth and here you are doing exactly what they try to prevent. In how far is this part of your marketing strategy?
We really just wanted our music to be accessible to people, and heard by people who wouldn’t otherwise have access to it. We haven’t had the opportunity of being on commercial radio or anything, so noisetrade has really helped us get our music into the hands (or ears I guess) of a lot more people. And some of those people have ended up coming out to shows, which is really cool.

What endeared your album to me is the differences in the songs. At what stage in the production process of a song does it become clear to you what a particular song needs?
We had a really grassroots approach to recording the songs: we started with just piano and vocals and built each track up one by one. It was a really neat process to see the whole song from beginning to end, and it was along the way that we would just feel out what we thought it needed

What is the role of your band in the whole process?
The band actually started forming after we recorded Over Land and Sea, so instead of writing the songs with a band, recording an album, then playing those songs live, I wrote the songs and recorded it, and then the band came in and we started playing the songs live. So the songs actually kept evolving after the studio and became a lot more “live” with the whole band.

In ‘Love, I lost’ an intricate horn arrangement can be heard. Who is responsible for this and how did it come to be?
Our producer, Aaron Marsh, is a master arranger. He came up with most of the string/horn/woodwind arrangements on the album and played trombone himself. It definitely added a dimension to the songs that I would have never imagined.

The band’s name is one that catches attention. What is the story behind the name?
Well, it actually started as a joke. Years ago I had a bunch of friends I would jam and play around my hometown with. One of them, who played cello with me, came up with the idea and we all laughed about it. It kind of captured the essence of the band; a bunch of different people playing coming together to play music.

Your music has a new folk angle, but also what I would call quality pop and ballads. Who influenced you most over the past years?
I would say I’ve been influenced by a lot of indie rock music, a lot more so than folk. Some of my favourite bands over the years have been Copeland, Eisley, Feist, Coldplay, Mutemath, Muse, etc. Not a lot of folk, but I do love listening to folk music.

As the songs are so different, do you notice a difference in the response of audiences? Are there clear favourites?
I think one of the big favourites is ‘I Lost Myself,’ it’s pretty dance-y and people really get into it. But what I’ve heard from people is they have a few favourites but they like all the songs for different reasons, which is neat. Dance with Me seems to be another favourite.

‘How it goes’ has this up-beat tempo and happy sounding hand claps, while in the lyrics you touch on the biggest question in life: the uncertainty of why we are here. Why this, seeming?, contrast between lyric and song?
I think what I wanted to capture in this song is the adventure, the thrill of seeking out new places, but the underlying fear and uncertainty that goes along with that. But I wanted the exciting prospects of the adventure to be more prominent in the music

One theme on the record is to love and hold and (be) protected. How important is this to you, as this is harder to have when travelling a lot?
I really do value consistency, and though I’m not a super organized person, I appreciate routine, and it’s taken me a long time to find that on tour. What really helps is that I get to tour with my husband. And in the few years we’ve been on the road I feel like I’ve settled into a bit of a routine that helps it feel more comfortable and more like home. One thing that has been really important to me is the community we have on the road. We’ve met so many people and having friends in different places we travel to makes it easier to be in a different city every day.

Another recurring theme is life and death, ashes to ashes and this temporary earthly house. What makes this topic important to you in this phase of your life?
When I was writing most of the songs for Over Land and Sea, I had just gone through a lot of changes in my life, namely getting married, travelling across Canada, and starting to pursue music as a full-time career. It all happened really quickly, and I think the combination of it all made me start thinking of the temporary nature of our lives. Things can change on a moment’s notice, we can be here one day and gone tomorrow, so what are we going to do with the time that we have on earth?

To me ‘Like the mist’ is the most ambitious song of the album and the best. What inspired you to write this song?
‘Like the Mist’ was kind of the summation of the ideas of life and death, temporary existence, and the meaning of our time on earth that I had been pondering while writing Over Land and Sea. I kind of explored these ideas and then left it up to the listener to draw their own conclusions of it all with the final lyric “I hope you find what you’re looking for."

On the website an imaginary map is shown, is there a deeper thought behind it than the album title?
The map idea came from the idea of the album being a journey, both “over land and sea” and a journey through life and the experiences we face. It’s not a specific place because everyone’s journey is different, and everyone’s interpretation of the songs is different. I wanted to leave it open ended.

Where do you hope to be as an artist a year from now?
Well, I’d like to have another album in the works, and still be touring. It would be great to get over to Europe at some point as well!

(The Aimee reference in my review, is it coincidence or …)
Haha, must be coincidence!