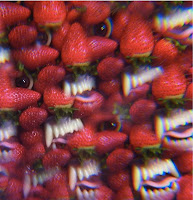 It seems I missed a few, albums that is. Since 2006 Thee Oh Sees have been putting records out at a stiff pace. The first two as The OhSees. And none of these reached my home, not even my ears as far as I'm aware. This changed with Floating coffin, just a few weeks back. And I've heard an album that I forgot the name of, but made me think that Frank Zappa and the Mothers of Inverntion had reunited to create 'Freak out' part 2. Totally spaced out hippie music on a firm rock and roll and doo wop basis. Floating coffin is somewhat more coherent, but still fun and adventurous as you'll find out if you bear with me.

Thee Oh Sees is a band from San Francisco that is the vehicle for John Dwyer to release his musical ideas. There's a long list of bands and names under which he released his music before that, since 2006 this name is consistent. It seems that Thee Oh Sees evolved naturally from a one man outfit to a full band. One member after another joined when the music Dwyer wanted to play evolved into a garage rock, psychedelic band. One main feature of the sound of Floating coffin is the harmonies of Bridged Dawson. The three gentleman around them play drums and guitar or bass, what a song calls for and that could be two drummers.

Floating coffins starts and ends with the wall of guitars that Dwyer, alone or with assistance, builds. This makes Floating coffin a hard rocking album. Nothing like most psychedelic bands I've been hearing in the past year. 'Maze fancier' pounds on relentlessly. Not unlike 'What goes on' or 'Beginning to see the light' by The Velvet Underground, but fuller and more condensed in sound. This puts Floating coffin in a line with the albums of The Black Angels. Also a great garagerock song like 'Heart attack' by Ghetto Ways comes to mind. Not exactly aimed at popular radio that is. The guitar is basically everywhere, with bass and drums mixed behind the guitars, the voice mix straight in the middle as if the sound comes through the middle of a stack of guitar amplifiers. This does not make for perfect listening on a headset. A keyboard solo? Also here the sound comes straight through the middle in 'Sweet helicopter'. Bridged Dawson takes the lead in this song, a great variation in the sound of Thee Oh Sees, that makes the album grow. What I also like is that some songs have the tightness of an early The Undertones song, like the obvious choice 'Teenage kicks', sprinkled with the playfully psychedelic overtones of 'Julie Ocean' in one.

Before you think it's all loudness and weirdness, it isn't. Although it's up at the very end, 'Minotaur' is this open and slower song that shows that Thee Oh Sees can also aim at a more sensitive sort of song. The viola of K. Dylan Edrich plays a prominent role in the song, totally unlike the way of John Cale's in 'Venus in furs'. There are more variations in the album, although more subtle and unreachable if you can't get past the loud rock and roll played here. The way the album kicks off tells all. 'I come from the mountain' is nothing short of a declaration. Loud, up-tempo, a driving beat, great small guitar leads, this fun organ riff and distorted vocals by Dwyer and Dawson. If you stand this, from there on it's a trip down Thee Oh Sees' Floating coffin lane. This leads you you to a slower, but also relentless psychedelic rocker called 'Toe cutter - Thumb blaster' sung by Dawson, more open than most songs on the album, but with a fantastic guitar blast or two. Next comes the title song with great dynamics in the instrumentation while the beat pounds on, tight and just about perfect. And it just goes on and on from the big rock and roll intro of the less louder 'No spell' and beyond.

Floating coffin is an album that arrived just in time for me. I was in for an overdose of sweet psychedelic and new folkrock and pop records that are just about everywhere, so totally ready for a more aural onslaught, but with melodies in place. Thee Oh Sees provided just that with its latest effort. Thank you says,