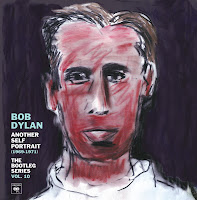 The first and foremost conclusion I drew hearing Another self portrait for the first time is a simple one: Bob Dylan was destroying his career full force around 1970 (and failed, as we know in 2013). The second is that we have another Dylan masterpiece on our hands. Another self portrait is of enormous and consistent quality. The third is how happy I am that I'm hearing this music in 2013, all-a-new.

Another self portrait is named this way, because there is an album called 'Self portrait', that was released in 1970. I bought  all "old" Dylan albums, i.e. everything before 'Desire', on cd in the 90s or as a second hand LP. This one I played about half way through and laid it away. So when I read that the next 'Bootleg series' was on 'Self portrait' I thought: ah, a Dylan album I can ignore. Wrong! It only took one review to make me go out and buy the album. (Thanks, Erwin!)

On Another self portrait we hear Dylan in the studio recording demos. The atmosphere is clearly relaxed and the accompaniment kept small. Drums, bass, two guitars or a piano. Sometimes harmonies. That's really all. And Bob Dylan of course who singing like he's having a great time. Relaxed, no strain on his voice, singing really, really well. Anything but the songs the world was presented with in 1970, that sound dull and uninspired mostly (or just not what people expected of Dylan, that's another view to take on the issue). The studio songs presented here come from three albums: 'Nashville skyline', 'Self portrait' and 'New morning'. (Perhaps also 'Dylan', the only album I don't have.) The atmosphere on Another self portrait comes closest to 'Nashville skyline', which comes very close to being my favourite Dylan album, so that explains why I'm so happy, I guess. My personal theory is that Dylan was happy in those days. Semi-reclused, with his family, small children and colleague friends to make music with. The only cover on which Dylan smiles, is Nashville slykine. On the inner cover of Another self portrait Dylan, a cover that is very close to 'Blonde on blonde's' cover in colour and tone, Dylan is also seen with a hint of a smile curling around his mouth. A good choice this photo.

In 2013 I've come to the conclusion that we should leave the Dylan mystery for what it is -although I'm definitely going to read part two of Ian Bell's biography on Dylan- and enjoy the music he gave the world. In whatever form. All the great songs that for whatever he did not want to release at the time of their inception are on sale since 1985 and even keep coming despite Dylan's claim that we've heard everything.

Listening more often to Another self portrait, it's time to come to the conclusion that volume 10 is the best since volume 1-3 (1991). Not because there are non-released masterpieces to be heard. No, because in several cases the final version is finally released on record. Inspired, well-played and perfectly sung. Dylan sounds great, so who cares that some songs finish abruptly for whatever reason in the studio; what went before is too good not to release.

The funniest example is 'Wigwam', Dylan's 1970 hitsingle. Without lyrics. The demo shows clearly that it was meant to be a song with lyrics. What would have happened to the single if Dylan had sung? The same result? Probably not. My guess is that people bought it unwittingly and would have shunned it with his raspy voice on it. Different audience. Best is that he finishes 'Wigwam' anyway. It would have been one of his best songs with lyrics in this version.

Another self portrait is a gift to all Dylan fans from the now 72 year bard. Having scored a #1 album in 2012, for whatever that is worth in 2012, with 'Tempest', Bob Dylan released another album that deserves this spot. One of the best albums released in 2013, without a doubt. Don't be fooled by the name, this is the real thing.