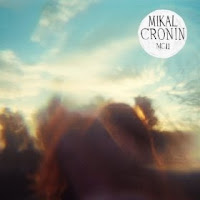 You can listen to 'Shout it out' here.

Every once a while a record comes by that just sparkles, like a mirror-ball out in the open sunshine. Fountains of Wayne was such a record. Recently I heard another such one. No, it's not that good, but Mikal Cronin beats most made by Weezer, so that is an achievement.

Mikal Cronin is a 27 year old musician from the U.S. associated with the scene around Ty Segall. Looking at his discography it's like looking at the playlist of a 70 year old rock veteran. A shear endless list of collaboration, EPs, 45s, cds he played on. Ever heard of Epsilons, Okie Dokie, Party Fowl, Moonhearts? I haven't. Cronin played with all. And found time to come up with his second solo album, mcii. And what a record it is.

Cronin manages to bring together a mix of sixties, garage rock, punkrock and a whole lot of pop feel in a bunch of super enthusiastic songs that make up mcii. As far as I'm concerned Ty Segall can't stand in the shoes of Mikal Cronin where song-writing skills go (let me correct that, as it is sometimes hard to discern a Segall song, the arranging skills). There's no shortage of that on mcii. Melodies flow freely and as if it's easy to write a great popsong. Several songs sound like they were created effortlessly. To make them more fun a saxophone comes by or a violin.

It's hard to pick out any one song, as they all have something special, something that endear. When the volume and speed go up, like in 'Change', it is still possible to hear the song as played on an acoustic guitar. It's only the distortion pedal adding flavour to the song, while a violin is allowed into the sound as well, resulting in a modern day 'Rawhide'.

The pop level on mcii goes so far that songs come close to 'I'll be there for you' the theme song of sitcom 'Friends', without annoying for one second. (Okay, the "Friends"song is sort of fun, but a bit sweet, right?) Cronin keeps surprising. When in 'Don't let me go' he bares his heart for all to hear, he comes dangerously close to the acclaimed Fountains of Wayne album and it is time to admit that mcii is not just your average punk-pop-garagerock album. mcii goes way beyond this. Mikal Cronin is showing himself as a major talent that can write great pop songs. It's time to put the album back on.

You can order mcii here