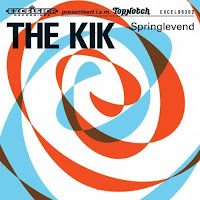 You can listen to 'Simone' here.

The Madd is dead, long live The Kik. Singer/guitarist Dave von Raven quit his garagerock band and started The Kik in 2011. Were the first two singles in English, this album is Dutch and if The Kik refutes something, then it is the legend that great popsongs must be sung in English. The spangly, jingle jangle guitar sounds and Dutch blend perfectly. Springlevend ("Alive and kicking") is a high mass of beat and pop. The sixties are all over this great, fun, ultimately retro album that was released at the end of May of this year on the Excelsior label, that proves, yet again, to have a fine ear for great guitar fuelled pop songs.

The Kik finds its inspiration in just two years of pop music: 1963 and 1964, the days that (Mersey) beat was all over the charts. Beatlesque chord progressions, The Hollies (from Manchester, but fill in any Liverpool pop group) like singing, Dave Davies' guitar lead in 'Luchtballon' and the organ of The Sonics (non-UK), Dave Clark Five pure pop, a The Who like intro. The band fuses these influences to blend into their own portion of excitement. Because sheer excitement it is.'Verliefd op een plaatje' is a early The Hollies like single with a George Harrison like guitar solo. While all the time the choruses are just to fall in love with. This song is so much fun. The Kik holds that quality in it to blend voices in a superb way.

The differences with The Madd are not so huge as might be expected. I think the switch to the more UK than US pop sound is the main difference, apart from the language of course. The Kik is more beat or pop oriented, but the effect of both bands' songs are identical, a retro feeling for things long past. Most lyrics are about girls, as they should be. Falling in love, out of love, longing for a beautiful girl.

The Kik even goes for authenticity in the form of doing a duet with the Dutch über-hippy Armand, famous for his one big hit in 1967 'Ben ik te min' in 'Want er is niemand'. His voice blends perfectly with this song. It's good to hear his voice in a new song, with relevance to the here and now, instead of being depicted as the, very weird, relic from an age long gone. Which is his self-chosen image.

It all ends with a familiar riff, 'Last train to Clarksville'? No, 'Zevenhuizer zondag' is a perfect cover of 'Pleasant valley Sunday'. Probably my favourite The Monkees song with a great guitar riff, something which is usually not referenced when people speak about The Monkees. The Dutch lyric is about band practice while the rest of the village is in church on Sunday. A little rebellion never hurt anyone and if Springlevend is the result of this little rebellion, I'd recommend to anyone. If you like good pop songs from the sixties this is your album for and from 2012.

You can order Springlevend here