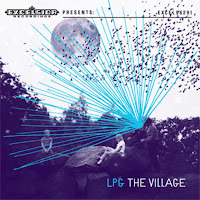 You can listen to 'Kids' here.

LPG, until a few months back, to me only stood for liquid gas at the gas station. (Over here we call "gas" gas and " fuel" benzine, so a gas station is a benzine station, where you can sometimes also buy LPG.) That was until I heard 'The village' for the first time, by Dutch indie band LPG.

It took a while for me to take a shine to this album. It resonated within me a little, but not so to make me come back to it regularly. This small voice in my head told me to make the effort anyway. So on my bike, while shopping or in the train I shuffled to the album and played it a few times and after that even started playing it at home also. Our relationship grew in a way not unlike my relationship to the band Caesar. Their, what turned out to be their final effort, eponymous album even made it to the top position of my year list of 2003, full of these somewhat weird, but o so convincingly poppy tunes, sung with that strange voice of Roald van Oosten. The village has the same, slightly awkward, qualities.

The village is also on the Excelsior label, the Dutch indie label specialising in guitar indie bands of which the sadly lamented Johan will probably forever be the best. Those familiar with the average Excelsior output know what to expect and are not disappointed. LPG serves indie of a somewhat under-cooled nature or pop with a twist. Not unlike Zita Swoon, in 'Say no', there is even Stef Kamil Carlens like singing.

If there's a point of critique on The village, it is that even after listening to it there's not one song that sticks in my mind, that I can whistle or sing a part of. Not even after at least a dozen + times listening to it. And still I come back, because what attracts me is the diversity of the album. From the mysterious opener 'Ouverture' to the title track ending the album, almost every track has something that sets it apart. The melody, a voice, the specific use of an instrument, an interesting hook. Despite the fact that most songs are in the mid-tempo range, always a difficult range to keep my attention fixed on the music, LPG keeps it highly interesting. The explosion of sound in 'Creation' after which the song ends a-capella. Followed by a piercing harmonica in 'Mobile'. The signature sound of a staccato played organ is what gives 'Paulus' it's little extra (and the deliciously trippy breaks). I deliberately mention this block of three songs, as they come by fairly late on The village. At a stage the album is still of interest to this listener, where a lot of albums get (dis)graced by fillers. Not so with LPG.

The sixties psychedelic influences on The village is something that draws me to it also. These are not very obvious like with The Dandy Warhols, but in the sound of a guitar, a specific break, a wah wah sound. This comes together in my favourite track on the album, 'Hang 'm'. This song has a delayed effect within it, as if the melody is dragged along behind the song. Conversation in Dutch in the background can be heard, while this great melody is kept up by LPG. Very well done!

The village is an album that deserves time and energy to build a relationship with. After each turn another gem is revealed, a sound found and piece of music to silently enjoy disclosed. I'm glad I took the time.

One thing though. If you want to sing in English, start working on the 'th'. It's too Dutch at present and that is a shame as this album is worth while for any one living past The Hook, Retranchement or Lobith to listen to.

You can order The village here