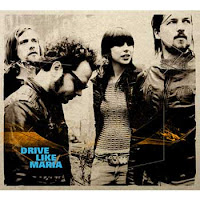 You can listen to 'Black horses' here.

Despite the fact that I only discovered 'Elmwood' a few weeks back (read all about it here), there's no real reason to wait with getting familiar with the new album of Drive like Maria in the here and now. Having enjoyed 'Elmwood', I was quite curious to find out about more music of the band. To start with there is a major change in the line up. Ex-Krezip drummer, Bart van den Berg joined the band (quite the change, I'd say), but he's battering away as if he's always played in hard rocking stoner band.

Drive Like Maria (DLM) picked things up where they left it with 'Elmwood'. The guitars rock hard, the bass pumps and the drums are kicked hard. The band doesn't leave it at that. There are some pleasant tricks up its sleeve. Starting the album off is 'The dog died rough'. With a reference to sex in the second line of the song the tone is set. This songs reminds me of QOTSA straight away, like many songs on their first record did. A deep distorted bottom end guitar and a high wining one at the opposite end. Many a band would be satisfied if they were able to get a level that this reference is made. Not so DLM and that's why the band is special. It's not for nothing I suppose that the main message of the song is: "I wanna be somebody else, don't want to be like you".

DLM is clearly looking for where the melody and the harmony can be found and succeeds. There are some references to punkpop whoas in the background. Always great fun when in an audience to sing along with and a great fan winner. Bjorn Awouters is not afraid to reach higher with his voice, even falsetto where the song asks for it. A little Foo Fighters with a good refrain in "Where the broken-hearted go", gives the song all sorts of injection that make it very interesting to keep listening to.

'Howl' is the second single of Drive Like Maria, a duet of Awouters with Lara Chedraoul if the Belgian band Intergalactic Lovers. A great very cool song that keeps loads of emotions just under the surface, ready to erupt. 'Black horses' is up next and starts also in arctic conditions, What's going to happen?, I keep asking myself, till the roof's blown of towards the end of the song. And we're only four songs down the album, with all this rock hard ear candy coming by. This diversity is kept up without any trouble by DLM during the rest of the album. The band is not afraid of putting some pop element into their songs. At their poppiest they come close to the loudest songs of Di-rect, but their natural habitat is the hardrocking side of rootsrock.

'On the road' is an acoustic outing with violins, school bells and a resting point on the album. The song shows the ease with which Awouters sings and keeps his own in a more mellow song also. Perhaps the album has almost too many flavours for some, but the way I look at it, it shows how good the band is. The dynamics in 'Settling down' are just great, but not a trick that can be done too many times. It all ends with a lonesome cowboy like song. 'Bury my heart in the desert' has the right sounds, bringing fond memories of 'Once upon a time in the west' and 'Rawhide'. This eerie sort of mood makes me think of wind, sand, tumble weeds and loss.

All in all Drive Like Maria is a great step forward for the band. A growth in presentation, songs and singing. Booked at the right venues and festivals they should come up trumps as one the best Belgian/Dutch rock bands. A band to follow. Next challenge: see them live. Who invites me to the party? I'll offer a review in exchange.